The Most Sinful Place in the House???

Why the kitchen of course. Imagine all the yummy things you can do in that illustrious place in your house. Whether you grab a bit of the bubbly from the fridge and enjoy a moment of frivolity together as the I-Pod plays a wonderful mixture of 80’s tunes or you prepare a dinner together, complete with a wet towel fight, the sultry room can prove to be most…delicious.

Do you have an island perhaps? Clear it off for me and imagine. How about a basket full of kinky toys? Bring it down into the kitchen. Light the candles and add a touch of Spanish guitar music

and you have the perfect setting to…tie your lover across the empty space! Okay, I know what you are thinking – but have you ever tried it? Have you ever used your kitchen for anything else and something so provocative that you will never look at the revered space the same again?

Try it for me tonight. If you don’t have handcuffs, that’s okay. A lovely pair of stockings or a grouping of silk scarves will do. Wait, no toys in the house? Come on now, use your imagination. Fruits and vegetables are quite tasty indeed and not just for dinner any longer. I won’t describe in detail just what a bit of the bubbly does for a woman and I don’t mean in her mouth. You get the idea.

In my first release, Treats in a Plain Brown Wrapper, Trista hungered for her chocolate delight – the UPS man and let me tell you, the way they used used kitchen one blustery fall afternoon was…well, tasty. Here’s just a little treat that leads up to a very sizzling moment in the kitchen. See what you think and if it gives you any ideas…

He pushed her inside the house and closed the door behind them. “Let’s just say a peeping tom of sorts saw your tools of the trade yesterday.” 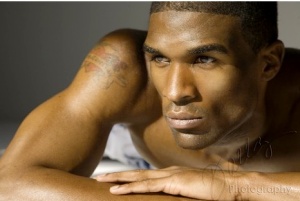 She thought about the items on the table and groaned. “Oh God!”

He looked into the kitchen and smiled. “Nice Island. Oh, I have a delicious sinful idea. Feel like playing?”

“With toys?” He dragged her to his chest kissing the tip of her nose as his hands snaked down to grab the hem of her dress. “You’re wearing way too many clothes.” He gave her a glassy stare and eased the material up with one hand as he pushed her toward the kitchen.

“But, but the blinds are open.”

“So your neighbors will know what you do.”

She palmed his chest and tried to stop the hulk of a man. There was no way. With a swift movement he had her dress off and pitched to the floor. “No, no! Al.”

He grinned and set down the basket, kicking it forward and reached for her breasts, giving her a carnal look. “Oh yes.” He cupped both in his large hands as he thumbed her nipples until they formed hard peaks. He pushed her another step. “Seems like you want this.”

“I do, but…” She glanced behind her as they crossed the threshold into the kitchen. Only one neighbor would be able to see.

“No buts girl. I’m going to use that little basket of toys on you as you squirm on that island. Then we’ll take your toys upstairs for the night.” Al grabbed her around the waist and pulled her further into the kitchen. He turned her around and snaked his hands around her waist. “You worried about that house right there? The one with the folks standing outside?”

She moaned as she stared at the couple. If they turned their heads, the light in the kitchen would show their bodies in their undressed

He unfastened her bra and yanked it from her body. As she gasped, he nuzzled into her neck, licking lazy sensuous circles until he reached her earlobe. Gently taking the soft flesh between his teeth, he suckled as his fingers continued pinching her nipples.

The dichotomy of pain and pleasure sent pulses down her spine and suddenly Trista didn’t care if the entire population of New Hampshire was standing on her lawn. “Oh…Al, you are…”

He turned her to face him and brushed his lips across hers. His breath sliced a wave of heat across her neck as he lowered his head and eased the tender flesh of her diamond hard bud between his teeth, biting down until her legs bucked under him. With a rugged touch, he guided one hand down to her black lace panties, massaging her pussy as he whispered into her ear. “I am going to try every little toy on your treacherously dangerous body so that when you write your stories, you know exactly what each one feels like. Then and only then I’ll fill you with my cock everywhere that you like until you scream from the pleasure I give you.” His finger slipped past the soft elastic to touch her burning clit.

Trista moaned as the flash of fire tore through her, sizzling her blood. Her wet cunt slickened his finger instantly.

“Now, I’ll give you about ten-seconds to close the blinds before I drag your hot body across this island. Do you understand me?”

He pushed her toward the window giving her ass a hard slap and cleared the single counter.

It took her maybe five seconds to slam the blinds down and turn on shaky legs to stare into his wild eyes. She wasn’t quite sure she had seen a man that thirsty to taste all her juices.

“Come my little vixen. Tonight you are mine.” He crooked his finger and beckoned her.

So tempted to run and see what he would do, Trista thought better of it and sashayed toward him as she placed her index finger into her mouth, suckling and drawing it in and out like the perfect lollypop. She placed her hand on her hip and cocked her stance, giving him her sauciest come hither look.

Al shook his head and stroked his cock. “Look at the wanton way you are dressed woman. It’s so wicked that you might just deserve to be punished. So very hot you are, yet so naughty.” He glanced into the basket and selected a toy. “Come woman. Now.”

She smiled over her finger and took two steps staying, just out of reach.

He growled and grabbed her arm, jerking her to face him. Holding up the pink fuzzy handcuffs, he grinned like a Cheshire cat as he pulled her wrists together. “First I have to make sure you stay all mine.” As he locked them into place, he laughed hoarsely and stared into her eyes. Bending down, he grabbed a very small egg-shaped vibrator. “This should do nicely.” Easing her panties down over her hips, he pressed his hand against her mound barely teasing, just enough to cause a long slow whimper and a stream of her honey cream. He picked her up and laid her across the slick surface.

She wanted to fight, just to toy with him but in truth, she was so turned on she wasn’t sure she could form a coherent sentence.

Hope it gave you very naughty ideas about the under utilized kitchen!

2 Responses to The Most Sinful Place in the House???