A taste of Taming Paradise

There’s no Six Sentence Sunday today but I thought I’d give you more than a nibble of my HOT July release – Taming Paradise. Imagine finding your fiance in the arms of a buxom blond half your age. What would you do? Perhaps go to the islands with your best friend? Yes – and what if she challenged you to find not just one,

but two hot men and engage in a little…R & R so to speak? Would you do it? Let’s take taste right from the beginning and then you tell me…

“Here’s the thing girlfriend. You need to get fucked. And I mean in such a way that you’re breathless and unable to walk for days.”

The remnants of her margarita flew past the edge of her lips and cascaded down across her bare thighs. “What did you say?” Shannon Myers gawked at her friend, Amy and groaned.

“You heard me. You need a cock buried in your pussy to get you out of that ugly mood.” Amy giggled and glanced over, her grin full of mischief.

“You heard me. Now shush while I ogle the incredibly hot bodies they have on this island. Have you ever seen anything so delicious and ready to eat in your life? We’ve died and gone to heaven, girl.”

Shannon sighed and stared at the sun kissed blond man lounging on the other side of the pool. His cock pressed the tight material out from his hips. She licked her lips and for a brief second thought about sucking him with wild abandon, then thrust the lurid thoughts in the back of her mind. Still, he was stunning. Whew! “I don’t know.”

“Don’t know? Are you freaking kidding me? They’re ripe and ready to eat like sticks of succulent candy. Yummy! Look at that one over there. What I’d like to do with his luscious body is probably illegal in several states.” Sighing, Amy nibbled on the fuchsia straw poking up out of her fruity drink and lifted her sunglasses to eye the men in various shapes and sizes surrounding the pool. “Delicious. Oh yeah, they’re all babes in Toyland and it’s time for this little girl to play. Can’t you just imagine some of these cocks buried inside your pussy, girl? Seriously, that would meet doctor’s orders.” Absently she feathered her fingers across the protruding outline of her rock hard bud under her bikini top, finally sliding under the flimsy material, 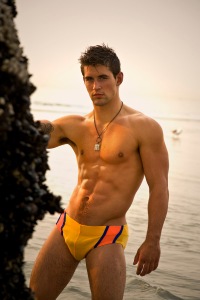 flicking her finger across her nipple in lazy motions, purring.

Shannon frowned and glanced across the shimmering pool, reflecting the iridescent gold of the late morning sun. Several of the young male guests preened and obviously hungered for company. Somehow the vision curled Shannon’s stomach, yet she had to admit, the yummies were hot and she was in need. These boys are half your age. Shivering, Shannon envisioned their naked bodies. As she licked her lips, her pussy tingled from the lascivious thoughts. Chastising herself, she growled remembering she came to the gorgeous island for respite and recovery, not fresh prey.

“They are half our age to be exact and who the hell cares?” Amy said as if reading Shannon’s thoughts. “My God Shannon, we came down here for sun, drinks, relaxation and some kinky sex and not necessarily in that order. Come on girl.”

“Correction, you ran away with me to the Caymans as my best friend to help me wallow in my misery.“

“Oh Christ woman. You need to get laid! You need wild steamy sex with not just one but two hunky males and I think I know how to make that happen.”

“Please say that a little louder so everyone at the pool can hear you!” Granted, Shannon hadn’t had sex since she found out Randolph had cheated on her with a water nymph or so she liked to call the twenty something spicy bottled blonde with fake boobs.  She remembered seeing the vixen riding her man like a stallion in heat, naked except for a dangling gold necklace. The woman, hell the girl was half her age and the damning event refused to leave her mind. That had been almost six months ago.

Amy glanced over at her as she swirled her drink. “All right, I’ve had enough of this pouting shit. We’re in a place that could only be described as a slice of heaven and you’ve done nothing but think about that freaking asshole you dated for far too long. I’m taking matters into my own hands, and girlfriend, you will not say no to me or I’ll find a way to make you suffer.”

Shannon grimaced and shook her head. Amy might be right but Shannon still stung from being pushed aside for a younger version. She glanced at her finger, rubbed a thin line where the engagement ring used to be and watched Amy saunter toward the bar. If anyone could get her out of her ridiculous doldrums, Amy, the buxom redhead who had been her best friend for years just might be able to. There

was no doubt Shannon wanted to live again, but the thought of having sex with a stranger was sinful. Salacious. But the shameless thought did indeed sizzle her cunt.

“Here we go. You’re going to love this.” Amy handed her a pineapple filed with vibrantly colored straws.

“What is this?” Shannon asked as she raised her eyebrow.

“This is a naughty girl game called Taming Paradise and it’s one I won’t take no for an answer.”

“Taming Paradise? That sounds like something I wouldn’t do and you know it.”

Amy grinned and suckled her finger. “Well, how about this, you play lest I publish your diary over the internet.”

Amy cocked her hip, tipped her glasses and gave Shannon a saucy grin. “Try me.”

Shannon growled and climbed out of the lounge chair. “What do you want me to do?”

“Short straws. The one that picks the shortest straw has to select not one but two of these fine hunky stud muffins. The fun part is you have to seduce both of the breathtaking hunks at the same time or face spending the remainder of the trip inside the hotel room. Of course you can do the nasty in the pool this afternoon for an appetizer and we’ll allow that to count as points.”

“What? Are you insane?” Shannon crossed her arms under her breasts and stared at her friend.

“Are you out of your fucking mind? Ever hear of diseases and all of the rest that goes with something this crazy?” Thoughts of going home with something contagious ran through Shannon’s mind.

“Tests can be wrong.”

“Jesus! Pick or face my wrath!” Amy jutted out her hand and turned to admire the waiter heading in their direction. “Think about it honey, several nights of unbridled carnal sex with two hot, well hung and very hungry men. I think that’ll cure all your ails. Besides, there are ways of being careful and you know it. Just let yourself go for once. You’ve done it before.”

“Let’s see, when you met the cheating asshole, remember? You met him, had one dance and then went with him to New Zealand for God sake the next day. What do you call that?”

Shannon cringed remembering the delicious week in paradise. She’d fallen deeply in love by the time they left the airport. “Don’t remind me.”

“You honestly want me to seduce two strangers?”

“That’s the idea, no strings. Sex, sex and more sex and that’s it.”

Whatya think kids? Could you do it? What I will tell you is that she meets two of the hottest guys from New Zealand and they indulge her in her wildest fantasies and in the end…well, you’ll have to wait and find out.

Here’s the secret about this one. This is inspired by a real life hottie that taught me the Maori language so I could include some sexy phrases in the piece. Thanks so much Adam – my private down under man.