I love vampires and all creatures of the night but I want them to have to co-exist in our world where crimes committed by humans is just as horrendous as the damage they can inflict. Red Fire is about a human cop who must work with a vampire – granted he doesn’t believe the stunning Russian is a vampire – in order to solve brutal crimes. What our hero doesn’t understand is his utter attraction for the man and his 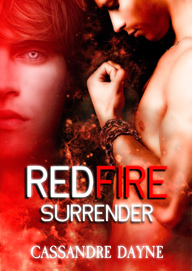 need to be dominated.

“Heinous as in sexual in nature.”

His words cut a slice through his system, sending another jolt of shivers racing through every blood cell in his body and the chill startled him. Jax tipped his head and eased forward, their noses now only two inches apart. “What I believe, Aleksandr, is that both of them had a direct connection to your studio and perhaps were both models that you’ve worked with recently for your showing. What I believe is that there’s a distinct possibility there are some things that you might know about the killings and are unsure of. What I know is that two men were ruthlessly murdered in their homes by something that could only be described as a savage animal. And while I appreciate your glowering attitude about this in the direct confrontation, I have a job to do.”

They remained staring into each other’s eyes for several minutes until finally Aleks pulled back. A slight grin matched the twinkle in his eyes. “Very foreboding, Jax Steele. I can see that you’re very committed to your job.”

awakened and he wanted nothing more than to become Aleks’ student.

Aleksandr Vasiliev carried dark secrets of his own. A monster to some, the vampire had forsaken his past and the family regime in search of a new life away from murdering humans. Unfortunately his previous subjects turned up gutted and he was the only suspect. As Jax and Aleks forged a bond to try and find the murderer, each suspected something that neither could control. As the power of domination and control swirled around their relationship, Jax was forced to face not only his ugly past but also hungers that burned deep in his soul. Betrayed, Aleks was determined to save Jax, his true mate but powerful vampires from his past threatened not only his lover but the entire human race. In a race against time, few would survive.

This one isn’t for the shimmering vampire lovers so…