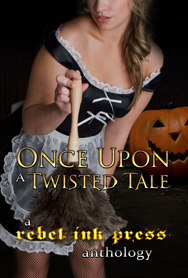 and a moment where our heroine is going to make a change in their world at the coming of the Scarlet Moon. Or will she? Would you allow yourself to succumb to a werewolf? This time tell me your favorite terrifying werewolf story and select two characters for my very bad boys who are werewolves – one is good and the other is…well naughty and I’ll be giving out a copy of Once Upon a Twisted Tale

Larken hated leaving but the call of his clan couldn’t be denied. Besides, the townspeople were on high alert. The move to watch them was bold and meant they were all in danger. As he entered his village in the dim light of the morning, he sensed all eyes were on him. He had found Scarlet and against the rules of his people, tasted. The only saving grace was that she belonged to the clan whether she realized it or not. Gazing up into the moon, the first hint of crimson passed across the edge. Sniffing, he knew both Bristol and Trevor hovered in the shadows. His people had waited long enough praying for the right mate. Her arrival spoken in many shared stories, the moment he laid eyes on Scarlet Dumane, he knew of her calling as did the others.

There was no denying what Viola had been to his people and gaining Scarlet’s trust and understanding meant the continuation of their people. As he climbed out of the truck and headed for the front door, he smiled. “Come out of the shadows at least, brothers. You must want to know everything about her.”

“You risked our entire lives to be with her,” Trevor hissed.

“This time I have to agree Larken. The townspeople are very well aware of what her arrival means. They hoped to be rid of the Dumane family,” Bristol eased next to the door.

“They’re just terrified of the future.” Larken walked inside knowing the other two would follow. Clan brothers, each one was the direct descendant of the three original families of the Red Wolves, considered the most powerful of their kind. By all rights they were the three princes and destined to take over, ruling their kingdom as one family. That is if they remained alive.

Trevor snarled. “As all of us are. The red moon comes soon and it doesn’t matter whether the fairytale is true or not. The ugly little town believes that they will lose their lives if the red moon passes so we’ll be hunted like animals.”

“And we have our mate,” Larken smiled, the sweet taste of her lingering on his lips.

“What do you think will happen once the others realize you’ve already taken steps in the mating process?” Bristol asked quietly.

“Perhaps its time to bring her into the fold early,” Larken realized what their answer would be but he couldn’t help teasing.

“If you follow directions, the mating ritual must be performed and I for one don’t believe in the bullshit of our clan,” Trevor scoffed.

“But you believe in the future of our kind, brother. Or don’t you? Are you willing to talk into the time of the red moon without having what our clan believes to be a mate?” Bristol snapped.

“What do you know, brother? You’ve just come to live amongst your kind 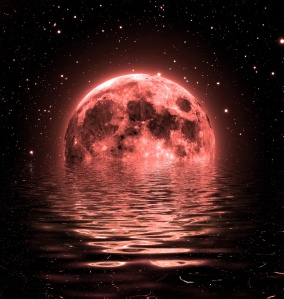 from the big city, remember? Seems like you resisted your calling for here full decades!” Trevor got in Bristol’s face.

“And you know damn good well why!”

“Take it easy,” Larken cautioned. “We have to work together. Scarlet is already being threatened but that started before I went to see her. We have to protect her until we can convince her to come voluntarily into the clan for protection if nothing else. You know that.” Larken hated the bad blood between the two. Bristol’s family had run away from the clan almost thirty years before taking their only baby boy with them. Both killed by an unknown murderer that was slowly picking off members of the Pack, Bristol had no choice but to come back home.

“Larken’s right. We need to get to know her each individually and protect her,” Bristol said as he rubbed his eyes. “She’s the only hope we have.”

“I still don’t believe in the old ways of magic.” Trevor walked to the back window and gazed outside.

Larken nodded and walked toward Trevor. “Then why is your need to feed growing outside of the cycle of the moon?” The closer it got to the time of the red moon the less human they were.

Larken laid his hand on Trevor’s shoulders. He had felt the urge to feed two days before and resisted. “With each passing day you’ll grow hungrier, unable to take human food until you’re forced to find suitable prey.”

“And if you can’t resist the urges and humans begin to die, we’re all doomed,” Bristol added.

Trevor beat his fist against the counter. “Why now?”

“Because it’s our ancestry,” Larken sighed. “If we get through the red moon then we have no need to turn unless forced.”

“Let’s talk about a plan and get some rest.” Bristol moved toward the kitchen table.

Larken nodded and thought about Scarlet. She had no idea what was going to happen to her as the full moon crossed the horizon. Terrified, he knew that some women couldn’t survive.

Scarlet woke alone and frustrated, longing to have her sinful lover next to her. As she rolled over, every part of her body ached like she’d been in a prizefight for the second morning. Making mental note to find a mattress store, she stumbled into the bathroom. Gazing into the mirror, she smiled at her reflection. By all rights she would be exhausted. They’d made love several times, even skipping dinner and she should look exhausted. Instead she glowed. Oddly enough, somewhere in the middle of the night she had been awakened by his leaving and by wolves howling outside the bedroom window. While the sound should have terrified her given the fairytale she was reading, she was instead comforted.

Climbing into the shower, she couldn’t get the gorgeous dark haired hunk out of her mind. She’d had more orgasms in one night than she had experienced in her life. Giggling, she stood under the water allowing the warmth to trickle over her skin and instantly goose bumps popped across her arms and legs. Whew! She was so turned on she shivered. 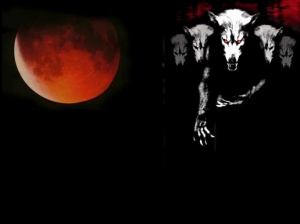 She alternated squeezing and pinching each nipple as she slid her other hand down her belly to her clit. Swirling her finger around in lazy circles across her sensitive flesh, she groaned longing to have Larken join her. Closing her eyes she envisioned his thick cock as she pressed her hand down further to the soft sweetness of her cunt. Plunging her fingers inside, her pussy muscles gripped around the invasion drawing them in deeper. In and out she thrust as the slickness of their combined cum drenched her hand. The wafting scent of sex and musk scent her senses into overdrive.

“Larken.” Opening and closing her eyes, a series of intense pulses thrashed through her body leaving her breathless and hungry to have his dick in her mouth. With every hard drive, her legs quaked and she was forced to claw the wall to remain standing. Tossing her head back and forth, she grabbed the showerhead down and fumbled to turn the dial to heavy dancing pulses as she laughed. Barely able to focus, she lowered the massager and placed the jetting stream directly on her pussy lips. “Aaaahhhh!” Instantly intense sensations roared trough her body.

Her body on fire, she pitched her hips forward and backwards as a thrashing wave slammed against her body. The climax raced from her toes up her legs, rocketing into her cunt. Throwing her head back, her legs shook as the single orgasm became a series. “Yyyyyeeesss!” Her strangled voice fluttering into the humid air, she licked her lips as her pussy quivered.

As she slowly dropped the showerhead, she smiled. Larken Myers was a luscious fringe benefit and one she intended on savoring for a long time.

The second Scarlet cut off the shower, the lights in the bathroom shut off. Standing frozen, fear gripped her sending a single shiver down her spine. She opened the shower curtain and peered out listening for any sounds. Hearing nothing out of the ordinary, she climbed out and grabbed a towel. Wrapping it around her tightly she glided into the bedroom glancing at the bedside clock. The electricity in the house was out. Frowning, she inched toward the closet and as she passed by the phone, it rang.

“Shit!” Jumping, she threw her hand over her heart and hissed. As she lifted the handset, instinct told her this wasn’t a friendly call. “Hello.”

The chuckle was somehow darker and much more threatening. “While you were whoring last night with that creature, an animal was slaughtered by another one of them. You’re the cause.”

Slaughtered? Now she was being accused of animal cruelty? “Look, I don’t know who you are but I’m just here to get my grandmother’s house in order to sell.”

Inhaling, he let out the long breath before he spoke. “Hear me good, little lady. You’re the supposed one and we ain’t gonna let you live to make a litter of those freaking werewolves so you got one last warning before you’re taken.”

“I don’t what they do to assholes in this part of town that threaten women but where I come from you get your ass locked up. You want a lesson in that, jerkoff?” Her body shaking bubbles floated past her lips.

“You don’t scare us even with your kind cause if they don’t have ya, they die. Take a look on your front porch and get a taste of what they do and what’s gonna happen to you if you don’t leave.”

As the line went dead, Scarlet stood shivering uncontrollably. This can’t be happening. Somehow she managed to grab a pair of short and a tank top. Gliding downstairs barefoot, every part of her trembled as she headed for the front door. At least Larken had locked the lower part of the door. It took her three times before she gathered the courage to open the door.

Scarlet Dumane didn’t believe in the ways of voodoo and magic or in creatures of the night. When she was called to the Bayou to settle her grandmother’s estate, she was faced with the possibility that werewolves existed. Immediately she began receiving calls from the townsfolk that didn’t like her kind. As a mysterious stranger and former handyman of her grandmother’s appeared at her door, she was curious to find out more. Larken Myers was sexy, rough-hewn and instantly their combined chemistry indicated something more than just attraction.

Finding an ancient book telling a tall fairytale of wolves, mating and a mysterious red moon, Scarlet scoffed at the information, until the threats became real. Larken enlisted the help of his two best friends to protect the woman he adored and the secret life he shared with others deep in the woods. As the crimson hued full moon approached, the town was determined to hunt her down. Could the three wolves protect her or would their entire existence be wiped out?

What do you think? Happy Halloween

Join me over at The Romance Studio today too for the Spookapalooza fest and you’ll get all kinds of excerpts and chances to win prizes!.