READY FOR A WICKED GAME OF POOL?

Or something more than that? In Wicked Wager Among Friends – the first in the Tales From Lucifer’s Lair – it’s about a game and a bet. This is my first cross over from Cassandre to Dakotah Black’s world of Pinked. Lucifer’s Lair is the man cave in the back of the Flamingo Rustler – a bar who plays a significant role in the Pinked Series – this time it’s where all things wicked can happen.

taste of a woman or realized they’re more bisexual – I know from my first husband. And this is fantasy – right?

Veronica Spelling was used to getting what she wanted, but not with men. She had long desired her best friend, Travis Hunter, for years. Golden, masculine and perfect, her mouth watered for him. And while they had admitted their kinky proclivities over long nights and tasty margaritas, he had never indulged. So she decided to take matters into her own hands and kick up the heat one wild night, suggesting a wicked little wager of pool. The prize? If she ended up the winner then she would receive her most heavenly desired wish, to be taken in the ass by a man for the first time. If he did, then she would become his sex slave for twenty-four luscious hours.

The only problem? He was decidedly gay, had only been with a woman once and was in a casual relationship with their mutual friend, Jonathan. Then there was that itching little problem of whether he could get it up or not. Against the odds, Travis finally determined his true feelings about the luscious vixen and won the bet. During those twenty-four hours, he fulfilled her most erotic fantasies. As morning dawned and reality set in, the question about Jonathan’s acceptance settled into their reality, and Veronica was left with a haunted feeling. Unsure of what to say, they left each other without further words. Could their combined friendship survive the blatant sensual act or would their entire world be turned upside down forever?

“Travis, what would you say if we kick up the heat of this little game and enter into a bit of wager sexy friend? A highly wicked one of course.” Veronica tossed her long locks and gave him that look merely to tempt. Tease.

“A wager?” He rubbed his forehead, squinted and finally turned his saucer-sized eyes directly on her. The look he gave her was blatantly cautious. Anxious.

She chuckled, but the delicious thought pulsed tiny vibrations into her pussy. “Or boy toy, are you too scared to play a dangerous gamble with a sizzling girl?” Her normally perky smile was laced with something a bit darker. Saucier. Her gaze smoky, she held the

pool stick in front of her, sliding the cool wood back and forth between the cleft of her chest. Finally resting the long pole between her breasts, she tipped her head back and sighed. Oh, there was no doubt that she was kicking up the heat in the bar by the coughs and groans that suddenly erupted inside the haze-laden space. The burning question remained, would Travis bite? Veronica Spelling cocked her head, swayed her hips back and forth and flicked the thin side of the pool cue back and forth across one nipple, which was now very erect from her naughty thoughts alone.

Travis eyed her, his expression circumspect as he sipped on his bourbon. “Okay. What did you have in mind?”

“Well, let think about this.” She licked her lips for clear emphasis and pressed a single finger past, darting inside her hot wet mouth. Suckling for effect, she pulsed it in and out as his eyes blazed a long trail down the length of her body. “Mmmm.” She eased the tip out and realized the glossy L’Oreal Vixen Red lipstick had stained her finger like a badge of wanton lust. She glided around the pool table and stood beside him so that he could be the only man in the darkened bar that could hear her shameless little words. Or so she thought.

Veronica was used to getting everything she wanted, in business that is, but not necessarily in men. Tonight, she hoped that would change. By day, she was a high well-respected accountant and by night a vixen in disguise. The sinful thought gave her a quiver. “Hmmm, let me give this some thought. Oh! I know! If I make the shot, then you personally get to be the very first guy that fucks me in the ass. And if you make the shot, then I’ll be your sex slave and do anything…you…want…me…to do…for…one…entire day…and night. Oh, and I do mean anything.” She knew what he craved, wild and very kinky. He was heavily into S & M and had generally been the top in his relationships. But lately, something had seemed amiss, which was one reason she had garnered her nerves to attempt something so blatantly shameless.

The crisp mahogany liquid spewed out of his mouth so fast that he gagged from the sudden flow. A solid stream of the cold liquor trickled in tiny beads across her cheek and down her almost transparent thin white shirt, forcing him to gasp and Veronica to shiver.

But not necessarily from the faux pas.

She grinned wickedly and wiped the frosty bourbon from her face, using the back of her hand in long sweeping motions. Her soft sexy laugh was the single noise that could be heard in the dimly lit smoky den.

That is other than the pulsing beat of the frenetic disco music that seemed to now match the wanton libidos of the entire room. The manly cave was full of burly men escaping the frothy version of the restaurant, the Flamingo Rustler. The group of hungry hunks had settled into the secluded and private back room club, Lucifer’s Lair, 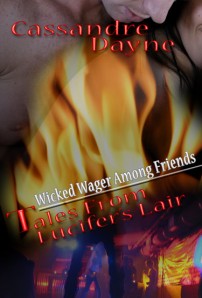 to play and relax. Suddenly their ears perks up from the scintillating wager placed literally on the table.

“Did I hear the little honey right?” His companion asked.

A tall striking male passed by them closely and scrutinized the completely frozen version of who was once her hot-blooded friend. “Buddy, if you don’t take her up on that enticing tasty offer, I sure as hell will.”

Noticing the bulge throbbing against the biker’s worn jeans, she sparkled with giggles.

Okay, so Veronica was now more than a little surprised that Travis still stood completely shocked by her blatant words. His shock-laden eyes bore a hole through her and that wasn’t his personality at all. No, Travis was normally an adventurer so she had anticipated a bit more of a reaction than the human version of an Alaskan Popsicle.

I so hope you enjoyed my little wicked game.