The Tough, The Paranormal & The Sexy…Kiki Howell

I have a fabulous guest today – the lovely and talented Miss Kiki Howell bringing us as taste of her trilogy – the first is hot off the presses from Naughty Nights Press. Please enjoy a taste of her worlds…

In writing my latest series, I looked at the paranormal clans in my stories – vampires, witches and werewolves – and put them up against each other, strengths to weaknesses, in war and in the bedroom. I wanted to see who had the upper hand where, but also, how I could increase the heavy breathing, the orgasms, the relationships that broke all the rules in my little resort town of The

I started with a vampire and a witch for my main characters in Book 1. When the vamp sweeps through with his increased speed and strength to kidnap a witch before she even knows what has her, I gave the vampire a bit of a shock too in that he could not only feel, but he recognized her magic. She was able to then dominant the mind games between them, and he questioned everything he felt. Even his true feeling he could blame on one of her spells when they were not. But, in bed, his dominance, his strength got to her while she used magic to…well basically freeze him and have her way with him and his stuck in a twenty-something body. Isaac was what I love in a vampire, all dark, a tragic past, forced into a life to survive, scarred inside and out, living a life in the shadows, doing a morally questionable job. So it was really sexy, steamy, to have such a dark and powerful creature sub-comb to magic, to make someone always strong weak in one tiny way though he maintains his alpha-male personality all the way through, weakening only for the forbidden love of a good witch.

The war had witches controlling the vampires and werewolves with their magic forcing their hand and possible exposure to the humans while vampires and werewolves fought in hand to hand combat – fur to fang if you will. By Book 2 and Book 3 I got to play with other ideas, like can a werewolf be turned to a vampire by a witch, can a werewolf hold his cool with a sexually dominant female vampire – here the sex got fast, hot and heavy like a war in the bedroom – one we only can dream of being part of! *blushes*

So much went into this series, at war or during sex, it was just so much fun, so intense, so arousing to write when you get to mix 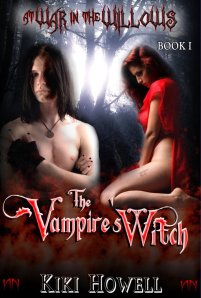 several paranormal creatures together. and you can’t forget those wonderful human that are lucky enough to get caught in the otherworldly crossfire from time to time 🙂

At War in the Willows, Novella Series

The Willows is a resort town run by vampires, werewolves and witches. Here, their true identities are kept secret from humans, and intimate relations between the individual clans are strictly forbidden.

When it becomes known that the vampire Amberlyn has fallen in love with the werewolf Kane, the tedious line of their co-existence has been crossed. Caught in the crossfire of this revelation, Drake, the vampire clan leader and Amberlyn’s maker, is killed along with an innocent witch. These deaths spark a series of horrific events leading to an all out War In The Willows.

In Book 1, Amberlyn’s vampire brother, Isaac, always one to kick ass first and deal with the consequences later, kidnaps a witch, Winter. He intends to find out what type of retaliation the witch clan is planning against the vampires and werewolves. In doing so, he finds so much more then he bargained for.

By Book 2, Isaac and Winter devise a plan to try to get the Elders of the clans talking peacefully. But, things don’t go as they’d hoped, and the fighting between the clans becomes more devious – deadly. Now, Devin, another Vampire of Drake’s making, steps in to help pick up some of the pieces.

When Book 3 begins, it is Devin who hides the biggest secret; he’s in love with a local human. In a moment of desperation – of love – Devin sweeps

this human, Sara, away to his home in order to keep her out of harm’s way.

Unexpected close encounters, bodies ripe with need, and situations beyond their control lead to forbidden relationships. Now three vampires, a witch, a werewolf and a human must ride along the edges of the rules. They will attempt once unthinkable romantic entanglements despite all those who oppose their relationships while fighting for their lives as well.

With the Willows full of violence and bloodshed, meetings and magic amiss, will the clans ever be able to find peace among them again? Or, will this war destroy the Willows?

~where love is a mystical thing~

Thank you so much for being here! The series looks incredible!

1 Response to The Tough, The Paranormal & The Sexy…Kiki Howell