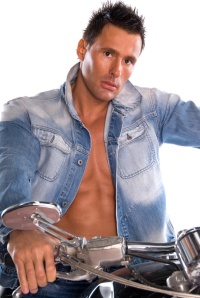 regards. I had to ask myself why I enjoy their characters so much and I guess there are a couple of reasons. One is that I tend to be a dark girl myself, preferring to enjoy some kinky aspects of life and no, this isn’t just about sex here.

Secondly is that I truly think sometimes we as people want to read about and even dream about others who maybe have a more difficult life and/or certainly issues they have to deal with. Then again, we as little girls always craved the bad boy, right? Hell, I know I did. I was the girl looking for the outcast football player or the boy smoking out back, not the quarterback. You know the type. The star of the show was all blond and perfect and had the rich parents. That wasn’t the guy for me. I wanted him with dark, brooding eyes and driving a supped up HOT sports car, screeching out of the school parking lot way too fast. Did I get what I wanted? Sadly, no but a girl can dream, right?

Just what does constitute a true bad boy? There are many types. He can be a bad boy in business and the kind who will use everything and stop at nothing to stab someone in the back – ugh, not my type at all. He can be the resident criminal who is just on the edge and while he’s not going to go anything horrific, he tends to muck up his life forever. Mmm… Not my type either. Let’s see, what are we missing? Okay, what about the man, who by day is the perfect gentleman with a good job and provides for a family and friends, has good moral values and then at night, the real man comes out. Maybe he cruises clubs, searching for the perfect woman and gives her one hell or a ride. If ya know what I mean.

Then how about the cowboy kind of man? Oh lordy I can see him in tight, well-worn jeans and maybe chaps, a lasso in his hand as he’s trying to herd some cattle. There’s some so sexy about a man who’s been working outside and has the rather musky scent about him. Whew, imagine dragging him to a lake and washing off all that trail dust. And of course there’s our standard and oh-so-sexy vampire. This one is much more dangerous than all the rest and while he’s sexy and will indeed seduce you, not only your body but also your soul as well, he just may rip out your throat in the end.

I think I’ve covered a lion’s share about dark and dangerous men. They are a constant thread in my books and of course even go toward the very evil side. I love to give them

a reason to be the way they are in very creative methods. This isn’t just about being jilted by a previous lover. They’ve had the kind of heartache and shakedown in their lives that tends to change them forever. Those are the kind of men who intrigue me the most. What about you? What kind of sexy, dark and delicious men do you want to read about?

So here’s just a little taste of my piece that’s being released today – already there at Amazon and Barnes & Noble called Body Art. Both of my heroes are bad boys, one driving a Harley, and they have significant reasons they are this way. Take a taste.

“If you think you’re ever going to see your brother alive again, you’re dead wrong. The asshole is going to pay for his betrayal and do you know how we deal with snitches? Let’s just say there won’t be anything left of his body to serve up for Thanksgiving dinner.” Ugly laughter filtered through the phone.

“You lay a fucking hand on him and so help me God I will hunt you down like a Goddamn dog and slice and dice you. Do you hear me asshole?”

“What an interesting thought. I just might take you up on that. You see, we don’t take kindly to assholes who think they are gonna best us. You know what we do with them? We feed ‘em to the sharks. Only the best for mother fuckers.”

The words rang in his ears like a knife slicing through his heart. Angry and ready for blood, he could barely keep his mind on riding down the two-lane road. There was no doubt in his mind what he was going to have to do – even if people died in the process. Duty and honor. They were two words he’d come to believe in during the early years of his life and now, he wasn’t certain what they meant any longer. After all, he wasn’t certain he had any left.

Dragging his mind out of hell, Taggard O’Neil, Rough Rider to all his friends, eased the Harley to a stop on what appeared to be a deserted road and cut the engine. He was enraged, bone tired and ready for rest and relaxation. Unfortunately this trip wasn’t about anything to do with leisure. The ride from state to state, seeking information and perhaps his personal sanity, was about revenge. And about blood. As he tugged off his helmet he gazed around the lush countryside and sighed. He had to admit Virginia was beautiful in the summer time. From the green grass and dense foliage, the entire state

seemed to be infused with vibrant color. Unfortunately, being pissed off forced him to see more primal colors and little else. He clenched his fist, bringing it to his mouth, and tried to calm his ragged breathing. Right.

Grunting, he kicked down the stand and climbed off the bike, brushing his massive hand through his sweaty strands of hair. It had been a damn long ride. Exhausted, he glanced at his watch and them looked toward the road, realizing he had only a few miles left on his journey, his fact-finding expedition. At least he could grab a shower and a shave, maybe catch some dinner before the real work began. Bagging and tagging the bad guys wasn’t his usual weekend jaunt, but right now he had little else he could do and going to the cops wasn’t an option – not if he wanted to see his brother alive again.

Tipping his head back, he breathed in the humid air and tried to figure out the best course of action. Finding his brother might be considered tougher than looking for a needle in a haystack, but he was determined not to leave the southern state without the wayward boy in tow – one way or the other. Coming up against the Scachi brothers wasn’t the best idea given the face the mafia family pretty well owned the seedier parts of Virginia, but he had no choice. Logan was all the family he had. While he hadn’t come up against the likes of the mafia before, his days as a trained killer in the military should give him a leg up. Should was the operative word and one he hated to admit he feared. Taggard was all about getting things done. Period.

He pulled out the only piece of information he’d gathered about his brother’s supposed whereabouts and shook his head. “Damn you, fucker.”

Taggard had to grin before snarling and shaking his head. The kid could get into trouble without even batting an eyelash. Fifteen years separated the brothers, and in truth he’d been more like a father figure to the slightly built and highly intellectual man since their father had run off to parts unknown with a Dixie darling in a short shirt and a nasty, vixen attitude. Too bad Logan couldn’t keep his head out of his ass. There was no doubt the kid was in way over his head this time. Why the hell he hadn’t seen the shit hitting the fan with his brother bothered the hell out of him. Then again, he’d been spending way too much time with his business, or maybe lack thereof, since returning from his last stint in Afghanistan.

Why he’d anticipated boosting his dwindling business into a successful one after retiring from the military he’d never know, but things were getting dicey in his world. Logan had tried to help when he was gone, but the kid just couldn’t cut it. Or maybe he’d been expecting too much. Even the trip to hopefully locate his brother was being financed by credit cards. His life wasn’t what he hoped it would be. Taggard had a dying business, a house under water and no love life. Stop feeling sorry for yourself.

So what do you think ladies? Is he bad enough for you?