Posted on September 23, 2012 by Cassandre Dayne

My short answer – no. Scratching your head yet? Okay so like many people who truly do try and not only write about the lifestyle but also are becoming more and more interested in the concept personally, Fifty Shades does piss me off. There, I said it for the first time. However I’m not begrudging her success or the fact she single handedly has brought the coveted lifestyle into the forefront. Thank God for that and for her ability to open people’s eyes. The sad aspect around her tale is that so many in the media and the average Joe has no idea of the truth behind the aspects of what she’s talking about. Her flavor was just that – a flavor. What concerns me is that the very 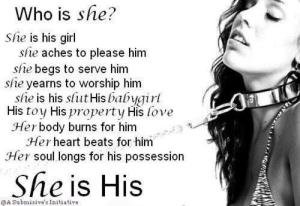 What I wanted to do was to make certain people don’t think that BDSM and D/s are one in the same before we move on in the journey. They certainly can be intertwined but they are not necessarily something that is enjoyed or indulged in together. For those of you who don’t understand why there are differences, let’s look at the basics. D/s is a dominant/submissive situation where one person is the Dom/Domme and the other is the sub. The bottom line basics is that one is in control of the decisions/relationship and the other follows or obeys. There are about a million varying degrees of this so there is no way to cookie cutter exactly what two people are going to share together except the fact is that one is the leader in all aspects.

The Dom/Domme is going to have certain rules that must be followed and they can include everything from the sub keeping his or herself well to cuss words not being allowed in the house. The sub may have certain chores to perform and in truth generally will always be available for sex at any time. There may be other aspects including discipline for misbehaving and this may and often do include spankings but being punished for disobeying isn’t BDSM. This is punishing a sub for bad behavior in an attempt to nurture and guide him or her into becoming a better person. This is also what is phrased as practicing Domestic Discipline in a household, which is simply another layer. So for layman’s terms the Dom (I’m going to be using a male in this conversation) is entirely in charge of the household in all ways. He is going to be the one who will sit down with his sub and they’ll discuss what’s expected and in many relationships an actual contract will be signed. This might not be as formal as something that would hold up in court but the intent is indeed the same. For so many I honestly see this as something that is so enlightening for both and the sub longs to please, yes, but she wants to be freed of the inner inhibitions that have plagued her every moment of her life. She wants and craves being a better woman and one who can give everything to her Dom. For her this is the only way she can be fulfilled. 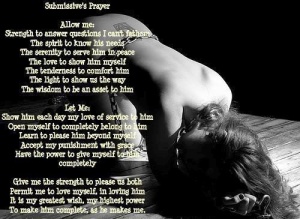 Expectations and rules enable both parties to know what’s expected and the sub is very willing usually to obey and abide. This is the nature of a D/s situation. A sub wants and is only fulfilled mentally, emotionally, spiritually and sexually by serving a Master. He or she has to do this and this is no different for a Dom. He has to be the top and has to be in charge and needs a sub to serve, please and be completely and utterly devoted to his needs. For many Doms this does include sex and in some cases extremely kinky sex – at least in terms of very vanilla relationships. Does this include being tied or flogged, using electric stimulus or other methods of pain? Yes, at times – but not always. 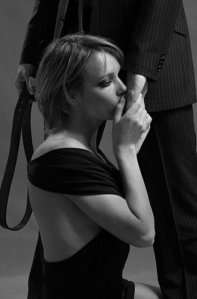 another sub. You are going to see them moving in this direction, but slowly over time and after the trust it built to a point Jessie is completely comfortable with what Luke is suggesting. The act of BDSM is an art and for couples who have no idea about aspects, you need to learn and there are ways in which to gain knowledge. What I do see in a lot of D/s relationships is the concept of punishment. Ben and I have talked in detail about spankings and the old fashioned corner time for Jessie and other methods as well. Domestic Discipline has been practiced in very traditional relationships for centuries. This is included in many Christian homes and the man is usually the Head of Household and expects the wife to perform certain duties. She is in charge of the children etc. and when she misbehaves she’s taken over his knee and given a spanking. This is known and is what it is and works very well. What you may not know is that many very vanilla relationships are moving back to this. Interesting, eh?

Many couples practice this in D/s and others augment with other forms of punishment including the removal of privileges. While those in a vanilla relationship might scoff, you have to remember this is what both the Dom and the sub not just want but NEED period. For some women (and of course men too) being taken over his knee is freeing, almost absolving sins similar to confessing. For every couple and situation this is different. Notice I remind you of that often? The decision and the journey is very personal and it’s different for every couple. Now that you’ve taken the step and been very honest but with yourself and with your partner you can truly explore what you want and what you have to have. Just know that you don’t have to practice BDSM at all. There are no requirements or musts. There is only what you decide together and yes your life will change.

Just another taste and we’ll start moving into more aspects in my next blogs. Let me know what you think.