Posted on September 27, 2012 by Cassandre Dayne

Mmm – doesn’t that sound like a very delicious combination? I have a vampire piece coming out October 3rd from Rebel Ink Press that’s very sexy and terrifying. It’s all about a curse and a murder on the darkened streets of New Orleans. There’s voodoo and mystery, same sex and a menage and all things yummy in between. Take a taste and see if you can believe in creatures of the night.

On the darkened streets of New Orleans, an underground world of vampires thrives. While they roam freely, living and working among humans who have no knowledge of 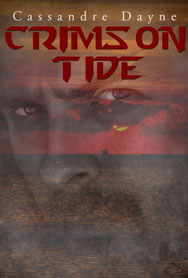 their kind, there’s a deadly curse ready to destroy the ancient civilization. Armando Chevall and Sebastian Argine are business partners as well as lovers and have lived for centuries. Unfortunately Sebastian is under the influence of the deadly disease and one that will end his life as well as drive him into hell. The only cure? Finding the correct human mate for blood and bonding and a dose of Crimson Tide, a specialized drug developed and held by a madman. Master Vampire Tregan Dumont holds the key to who lives or dies and enjoys the game while feasting on humans. Considered savage by even vampire standards, he uses every tactic to obtain what he craves.

Scarlet Bernard is a tough marketing executive. No time for a man in her life, she’s savvy, highly intelligent and very lonely. Out of town on business, a chance meeting with a handsome stranger fills her with dark fantasies. Succumbing to her hunger, she can’t get him out of her mind, longing for something she can’t understand. When she’s introduced to Armando’s lover, she’s more than intrigued and shared passions ignite. What she couldn’t foresee is how important she is to an underground world until her life is placed in danger.

When Tregan learns of her existence, he’s more than just curious. He’s determined to make her his forever. After all, there’s an ugly secret shared with Armando and Tregan is out to annihilate his previous friend and all that he holds dear. As a battle of wills and power ensues, many in the city will die. Two questions haunt them. Is Scarlet the one and can she survive the ultimate bloodbath called revenge?

Armando Chevall knew two things on an evening where the full moonlight filled the sky and thoughts burned into the back of his mind. One, he was horny as hell and needed to thrust his aching cock into Sebastian’s tight ass and two, he was absolutely terrified his lover of several hundred years might not survive their lovemaking. At least not in the rough and tumble fashion they’d experienced all these years together, full of unbridled passion. Every heated and frenzied moment they’d shared as a couple flashed across his field of vision in a slow motion effect, causing him to snarl. How their life together had changed.

For centuries they’d been nothing more than animals mating well into the long, sultry nights in front of a blazing fire until the disease began ravaging Sebastian’s body, stealing his remaining human qualities. Sebastian Argine was not just Armando’s lover and his business partner, the intense vampire was also Armando’s salvation and his very breath of life could be nothing more than dust within two weeks. The ugly thought was the single reason Armando decided to sell his soul and his body to a man who could

only be described as a monster. He exhaled slowly realizing his decision was the pot calling the kettle black.

Being a wealthy vampire in the twenty-first century and living in the heart of one of the sexiest and most dangerous cities in the entire United States certainly had its benefits. Passionate and sometimes earth-shattering sex was certainly on the top of the list. Armando’s cock tingled just thinking about his increasing hunger. Adjusting his aching bulge, he licked his lips and thought about Sebastian’s tongue brushing across his blood engorged tip. God, the man knew how to suck him better than any human ever had. He stroked his cock as he thought about the damning prophecy.

Shaking his head, he gazed at the roaring flames in the oversized stone fireplace and clenched his fist, bringing it to his mouth. Barely one-hundred years before he would never have believed he could stand being this close to a killer, or be prepared to die in order to save a life. Save? There was no saving. They were all doomed into hell. No man wanted this life, not once they understood what they were giving up. Yet the thought that he could savor what he once considered to be the dazzling dance of erotic death fascinated him. Death. He’d thought about the ugly realization way too often these last months. Now there was another horrific killer among his kind that made death seem the better choice. How could he lose the love of his life to something so very damning? He couldn’t help but think about the crimson rush this way, a double entendre. Fire or disease. What a fucking choice to have to make.

Sebastian would burn in the scorching heat of hell one way or the other that would reduce him to ashes or by a disease that threatened not only his sensuous and perfect body but also his eternal life. The life they’d built together these last six hundred years. As he stood watching the mesmerized interest of his partner, his lover, he couldn’t help but be amazed. For some reason Sebastian believed the sizzling flames warmed his body – not just his soul. Refreshing for a man who faced total demise.

Of course that was a fallacy. Warmth was certainly desirable but unattainable. Unless frying in the laps of hell meant warmth. They were both forever frozen in a time capsule. They were never to age and never to feel the cozy kiss of the blazing sunlight on their fair skin again. He hated that aspect of being what he was but there was no turning back. That is unless his body ceased to exist. How he’d loved staring at each beautiful sunrise. Oh, they could maintain for a limited time in the brightness of the day, but a lengthened amount of time meant their tissue would damage and possibly never heal. Still, their advanced breeding allowed them to enjoy so many human attributes and an aspect of the daytime bought them protection. He thought about Sebastian and fought a ragged sigh. So painful, the sensations sent shards of blinding light through his retinas. He may not be able to feel the wonders of warmth but he could certainly feel anguish.

Sebastian’s eyes burned into his. They were sensual eyes and yet haunted. The man had lived through too many horrors but for some reason they were begging Armando to take him even before the evening began. How Armando wanted nothing more than to slide his hands down Sebastian’s carved chest to the curve of his slender hips and then to a pair of the longest and sexiest legs he’d ever laid eyes on. He licked his lips imagining taking Sebastian’s thick cock into his mouth, suckling the musky taste.

Savoring the first drop of spicy pre-cum as Sebastian shivered above him would be an incredible start. The taste of the man drove him nearly crazy and Armando wanted nothing more than to rip his clothes off and take him in front of the fire, licking the length of him as he squeezed his balls until the whimper became a cry.

As Sebastian’s eyes cascaded down the length of Armando’s body and back up to stare longingly at his face, Armando shivered. The man knew how to make his blood boil and his dick throb. Now aching, he adjusted the swollen bulge in his pants. Armando closed his eyes as the sensual thought of thrusting his shaft deep into his lover’s ass while Sebastian moaned and called out his name was almost enough for him to break his vow of celibacy. God, he could feel the man’s lithe fingers dancing over his chest, to his ass. His lids fluttered open and one very knowing thirsty man tipped his head in acknowledgement.

Armando growled and glanced away, his cock in near anguish. Sebastian had to heal. He had to live. Damn it, he was going to do everything in his power to allow that to happen.

He turned to watch as Miriam, their assistant, entered the room. The frumpy woman was always so formal in her duties, even though she had endured their particular proclivities for twelve years. From the moment they’d moved to New Orleans, she’d been with them, never questioning who they were or what they did so late into the night. Midnight excursions will be the death of you both. She would say. He knew she must have some ideas about their business dealings, but she never asked questions. Miriam was without question completely trustworthy, utterly loyal and more than kind to both of them. The attributes were invaluable and not just to every businessman or woman but to his kind in particular.

“Sir, your brandy.” She lowered her eyes as she offered him the first crystal glass of his favorite cocktail. She provided exactly what both of them enjoyed.

He chuckled. His second favorite libation anyway. “Miriam, you’ve been with Sebastian and I for what…ten years?”

Armando reached out and tussled her curly blond hair. She was sadly aging as all humans did but she held the years well. Only the slightest of frown lines crossed her lovely face. “That earns you the right to call me Armando.”