Indulging in Your Fantasies…A Menage Plus One?

Do you trust your lover enough to do something truly wild and wicked?

Halle Tremont loved kinky sex. When the mysterious phone call came in the middle of a busy morning at her office commanding her to remove her panties, she was shocked, but

she removed them. Unfettered by his shameless request, she stood in front of the window allowing her voyeur to see all of her as she engaged in a little play. There was little she wouldn’t do for the mystery man that garnered her attention and allowed her to revel in her kinky side. Her lover, Snake Brennon, wanted her hot and hungry and their wicked affair had thrown them into some interesting positions; making love in the middle of an elevator, at his construction site and in a restaurant bathroom. There was nothing they wouldn’t try.

However, Snake knew what she really craved and with the help of her best friend and one very exotic party, set out to fulfill her every fantasy. The first? Being pampered by several hand selected masked male volunteers to pleasure her naked body in the glistening pool while the guests observed. The second? A night of uninhibited passion as she lay bound, gagged and blindfolded. Enlisting the help of the same secret lovers, he was determined to give her the most uninhibited night of her life. The questions remained, who were the stunning men and could she savor the salacious acts or would the final kinky event put an end to their relationship?

Halle whimpered and eyed the men. Her legs quivered and her fingers tugged Snake’s arms. Snake unfastened the single button and unzipped her skirt slowly while he bit down on her hard pebbles. He forced the slinky leather down past her ass until it fell to the ground.

Crack! He smacked her bottom. “What did I say to you?” Her moan rose above the shimmer of the waterfall, fueling his beast that wanted nothing more than to consume her. He lifted her body and kicked the skirt away. He moved her back and leered at her stunning body, ripe and ready like a perfect strawberry in the height of spring, delicious and sweet. “I’m famished for you.”

Standing only in panties, stockings and heels, embarrassment was replaced by shameless thirst as her eyes blazed a long and wicked trail down the length of his body.

He allowed seconds to tick by as she gazed at the men and then back to his eyes. “Are you ready?”

Somehow he’d been unprepared for her complete submission to him so quickly, to his needs, his savage yearnings. Standing in awe, he shook his head. “You never cease to amaze me.” He sensed the men approaching, flanking the opposite sides waiting for his cue. His hand snaked out and his fingers gripped her arm, tugging her forward.

A movement in the shadows drew her attention. “Who else is there?”

His chuckle nothing but a sinful hiss, he whispered in the sultry range he knew dropped her to her knees. “There are many things waiting for you love. This is nothing more than a treat. My tempting men bring gifts for you. Toys for tonight and perhaps something else later.”

Snake breathed over Halle’s shoulders, sending goose bumps dancing across the flush of her skin. “Are you ready to be consumed? Are you ready to be tasted by hungry men that want to drink your delicious pussy juice?” Snake knew every inch of her body and the points of rapture that could bring her to an orgasm almost instantly. Nibbling on her earlobe, his fingers flicked over her nipple, slowly. Deliberately.

Snake turned her head slowly to stare at the closest masked man. “This is Thor, he enjoys ravaging a woman’s pussy with his very long tongue. He’ll sip your delicious heat 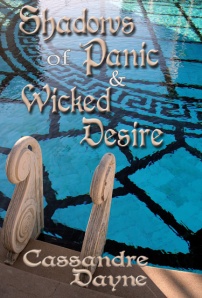 for hours, until you scream from a pleasure you have never known, until you beg for more.”

Thor moved forward another few inches as he slid his tongue out and over in the most gregarious fashion past his full rich lips, allowing her to see the unusual length. He rolled his head and gyrated his hips to the subtle strings of the now pulsing music. His cock bulged into his tight pants, sending visible shivers down her body.

Snake growled, low and husky. “Look to your right sunshine. He is Zeus. His cock is longer than any man’s that I’ve ever seen and he will take you to levels that you have never experienced before. Tell me my little kitten, would you like to see what he’s been commanded to offer you on our platter of sin. Would you like to see the cock that will plunge into your hot little box driving you into a level of insanity?”

As if mesmerized by the wicked event, she nodded, her body inching forward to see the masked second god. She flicked her tongue back and forth across her lips as her feet tamped into the concrete.

Zeus stepped forward and his golden blond locks became highlighted by the shower of light from the pool. His creamy skin reflected in the luminescent highlights and he took a moment to pose, shoulders back, hips thrust forward. It was nothing more than a blatant offering of his sex.

“My, sweet Lord.” Halle’s lips parted and her hand fluttered across her flushed face.

Zeus kept his eyes locked on hers as he unfastened his pants and lowered them down his chiseled hips. His massive cock thrust itself free from the tight bindings.

“Mmmm…my…God.” Her voice was nothing more than a husky whisper dripping of surprise and blatant hunger for a man, a complete naughty mystery.

“See how his cock throbs for you? Do you want that thick hard shaft thrusting inside your hot little pussy? Do you want him driving into the very core of your being, filling you with his seed?” Snake moved behind Halle, inching her toward the edge of the pool and closer to the men that so obviously desired the woman that stood like a wild beacon of light, beckoning them to taste her, consume her wild fires of utter detonation.

Halle nodded, her hips swaying in the moonlight, as she licked her lips.

Zeus stroked his cock from the tip of his engorged head to the base, while he slid a single finger down from his long neck to his tight brown nipple, flicking it back and forth while his eyes searched hers.

As Halle tried to inch forward, Snake wrapped his hands around her waist and jerked her back, forcing his thick erection into her ass, grinding slowly. “Not yet my love. You’re only allowed to look at your lascivious gift for now. Remember my sweet, I give the orders.”

She fell against him, lifting her ass to meet his subtle thrusts. “And the third?”

He laughed. “My, my, you are a wanton little creature.”

I hope you enjoyed – if you hunger you can purchase at all the haunts including All Romance E-books, Amazon, Bookstrand and Barnes & Noble.

1 Response to Indulging in Your Fantasies…A Menage Plus One?