Oh yeah, body paint and the kind your partner can lick off and I don’t mean the kind you purchase in sex stores. I mean the kind you find at your local grocery store. We’re going down memory lane to the past and this book was truly inspired by this HOT six foot five inch chocolate laced man who was the maintenance guy in a building I worked at. Eric was stunning and truly a fantasy. I developed a thought about advertising and using foot and Breakfast Eye Candy was born. I so hope you enjoy.

How far would you go to save your company from closing, perhaps finding inspiration in a naughty elevator ride?

Jessica Brown had a daunting task, save her failing company, Dreams for Your Future Advertising. Unfortunately she had one shot to do it. Delicious Foods had tapped her small company for a campaign for the hottest selling condiment in America, Peach Bliss. The only trouble? She hated the sticky mess and had no slogan. As she ventured into the office one early morning, her fantasy man, and one she had never been able to approach, 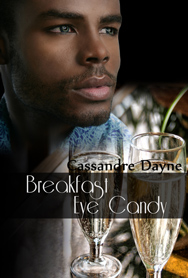 stood between her and the elevator, tempting her. Eric Gammon was chocolate in flavor and a sculpted God. He also was responsible for the maintenance on her office building and unattainable. Or was he?

Against all rationality, she blurted out her feelings. Stunned, he followed her into the lonely elevator and stopped its movement. Trapped, they explored a taste of their combined pent up desires and planned for the future. Using Eric to experiment exactly what the dazzling syrup could be used on, she garnered a wicked idea. Re-energized, Jessica tackled the account with flair. Everything was going smoothly until she realized that Eric’s ex, Stella, was none other than a top executive of Delicious Foods. Undaunted, she was more than ready for the tempting presentation involving an over heated room, some melting ice cream and a bit of the bubbly. That is until she realized Eric had lied and was going back to Stella. Crushed, she rallied and won the contract easily, but had she lost the man of her dreams?

Eric hesitated for a moment as if he was unsure what to do next and then he spoke, his voice suddenly full of angst. “I’m going to kiss you now. Is that all right?”

Hell yeah it’s freaking all right. It’s better than all right. There went the damn bobble head again. As he embraced her, capturing her mouth with his own, Jessica closed her eyes and let her world fade to black.

Eric cupped her face with his hands and held her gently as he pressed his tongue past her lips, exploring her mouth, their tongues entwining. Inching against her body, he moved back and forth across her hips.

Every cell in Jessica stood at attention and tingled from feeling Eric’s thick cock press against her belly. The kiss was quite possibly the most passionate and sensual french kiss Jessica had ever experienced. The taste of Eric was a luscious mixture of tangerines and plums. She shivered as he explored the dark reaches of her mouth with his tongue and fought a whimper with every soft touch.

He slid his hands down her back as he pressed his body into hers, forcing her against the back wall.

Their heated bodies melded together perfectly and Eric’s hands felt incredible cupping her ass, kneading vigorously. Their tongues entwined, tasting and sipping and 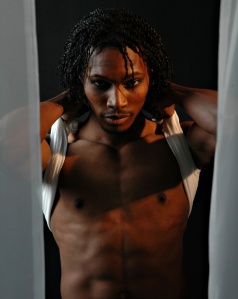 their thirst for each other unable to be contained. Unable to hold back, a moan escaped Jessica’s mouth.

Eric broke the kiss to nibble Jessica’s lower lip, tipping her head back as far as the steel enclosure would allow. “Jessica.”

Hearing the whisper of her name brush across the heat of her skin sent trembles down her body. Eric’s erection was thick and hard against her belly and she could smell their combined arousal, ripe and intoxicating. He licked circles down her neck and to the edge of her collarbone. Jessica fought strangled whimpers with Eric’s every touch. His musky aroma filled her senses and sent pulses of shattering heat into her pussy, soaking her already drenched panties.

Eric sliced a long lick into the swell of her breasts before he eased back and gave her a seductive smile, placing both of his hands on the wall beside her. “You taste so sweet.”

Jessica feathered her hand up his chest, massaging him with ginger fingers until she brushed her thumb across his full lips. “And you’re…amazing.” She couldn’t find the words as their eyes locked for a moment and each seemed to realize they were starting something perhaps a bit dangerous. Jessica tilted her head and brushed her lips across his, teasing him.

Careful? Oh no. Every part of her being screamed to have Eric’s thick cock inside her pushing her to limits she’d never known existed for her. She snaked her arms around his waist, a pool of blatant lust. She wanted to be the girl she’d always dreamed of, the wild and uninhibited one.

As he crushed her mouth with his, Eric groaned wildly, the savage noise reverberating throughout the dense space. His hands tumbled over her hair, his fingers entwining in her long locks. His hoarse grunts coursed through the intense kiss. 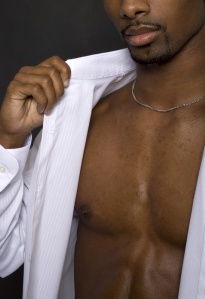 their way under her soft red dress. He kneaded her lacy panties and fingered the edge of the elastic. Breaking their kiss, he sighed into her and pressed the length of his throbbing shaft into her quivering body. “Jessica, you’re so beautiful, so damn sexy. I want to taste more.”

Hearing his words stunned her. Taking her hand, Eric pressed it over his cock. Just feeling how massive his shaft was almost dropped Jessica to her knees. She nearly melted into him and she feared being able to stand any longer. She longed to take his cock into her mouth and suckle him with fervor, but feared she’d lose what was left of her sanity.

Eric cupped her breast, caressing her tender skin as he flicked his thumb back and forth. As he pinched her tight nipples through the fabric, Jessica heard him whisper. “I want to make love with you.”

What? Oh sweet Jesus! “Ooohhhh…Eric…” A fire ripped through Jessica’s body forcing her to strain against his as she wrapped her arms around his neck, drawing him closer. As his cock pressed sensuously back and forth across her tummy, she moaned, relishing in the scintillating ripples of current.

Jessica opened her mouth to express her burning desire but her breath was caught in her throat.

Eric feathered kisses across her cheek and down to the edge of her chin, allowing his tongue to dart licks across the pulse of her neck. “Do you want something?”

Her words encouraged him and he slipped his hand between the material of the dress and her lacy bra. “You’re so sexy.”

Jessica’s fingers clawed his arms as the trickle of fear fluttered through her mind. “Eric.”

“Shhh…” Undaunted, he found his way past the sliver of lace to her breast, feathering his long fingers back and forth across her tingling nipple until it became diamond hard.

“Oh yes…Eric.” She closed her eyes and felt her legs tremble as every part of her flesh ached from need.

Eric moved back from the kiss and stared down at her with hazy eyes and Jessica responded by grinding her hips into his. In her mind she knew she should make him stop if for no other reason than they were in an elevator, but it wasn’t every day fantasies came to life. How could she dare stop this? Her heart racing, Jessica snaked her hand across the broad width of his chest, admiring his hard physique.

What do you think? Hungry for a man in your building?