Indulging Your Fantasies…The Hunger For Spirits and Magic

Savannah Lily was bored with her everyday life and hungered to spice up her life. Her job as a fashion consultant left her little time for a social life so when her three best friends suggested a game using the Ouija Board and a naughty dare, she initially scoffed 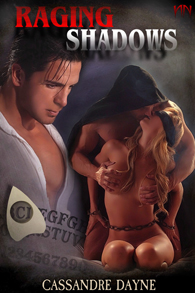 until she heard about the prize. She’d dabbled with the occult since her childhood, curious about all things that went bump in the night and Halloween was fast approaching. Hungry for one man who filled her every night with sinful visions, winning the prize just might help her achieve her ultimate fantasy, immortality.

Constantine Avion was considered by many to be a warlock specializing in the extreme torture of men and women. Some said he held the key of life and death in his hands and he was rumored to have a male lover. Feared by everyone that knew him, his secret club catered to the darker side of sex infused with magic. Entrance by invitation only, few were selected to go behind the hallowed doors.

For some reason Raging Shadows was having a Halloween party open to the public in groups of four or more. The only catch? One member of each party would be required to perform an act of seduction or kink if requested with no questions asked and Constantine determined how the game was played. As the night fast approached, Savannah was determined to entice the man some called a monster. Unfortunately she didn’t understand his level of power and his desperate needs until one night reminded her she was very much alive. Would Savannah decide to succumb to the man of her dreams and give up her soul or was there a darker power working against the tortured lovers?

While she didn’t see him move, Constantine had closed the distance until he was merely inches away from her. Savannah whimpered as she realized the true power of the man who stood before her. As if she was somewhere in the shadows of the past and the promise of many tomorrows, she nodded as she removed her bra, her eyes never leaving his. 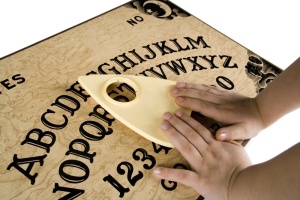 His words weren’t a request but a demand. Palming his chest, the instant she touched his skin she gasped. While cool to the touch, the tips of her fingers burned from electric jolts that seared every nerve ending. Tipping her head, she sensed his longing and his struggle to contain his beast. As she stroked his massive chest, allowing her fingers to dance down to his crotch, she trembled from a growing thirst, swelling her clit. Cupping him, she moaned. Long and thick, he would fill her just as she craved.

“Mmmm…” Growling, Constantine dropped his gaze to her breasts and snarled. “My feast.” Howling like a predator, he held her breasts in his hands and lowered his head, dragging the rough tip of his tongue across first one tip of her diamond hard nipple and then the other.

Reclining her head back, Savannah clawed at him, moans escaping from her mouth as his ice cold breath skipped across her skin forcing goose bumps to rise across her arms and legs. As he licked and suckled, taking the tender flesh between his teeth, she sucked in her breath and scratched his arms. ”Oh…ohoh…”

Constantine emitted a low rumble and tipped his head back. Opening his mouth, he snarled as he locked his eyes onto hers, “You will enjoy my power of ecstasy.”

Even in the dim lighting of the candles casting a warm and sensuous glow across the darkened space, Savannah shook, her pulse racing as terror shot into her system. There was nowhere to run and no way she could hide from the savage as his sharp canines erupted from his gums. She knew she’d never forget the sound as his skin folded back accepting the long incisors that scraped against his bottom lip. The subtle creaking sent a series of shivers down her spine and while a part of her knew she should fight to get away, the other wanted nothing more than for the hulking creature to consume every drop of her blood, her body and her soul.

His eyes sparkling, Constantine traced his tongue across the razor sharp tips before lowering his head. Brushing his canines across her cheek, he moved down to her lips and darted his tongue just inside her mouth as he cupped and kneaded her breasts, squeezing. “You’ll never be without me by your side.” As he tipped her into a deep arch, forcing her breasts closer to the heat of his mouth, he nipped her bottom lip drawing a single drop of blood. Fueled by the taste of her, he raked his teeth down her neck in a languishing pattern before engulfing her nipple in his mouth.

“Aaaaahhh!” The second he bit down, slicing into her skin, Savannah tossed her head back and emitted a single, sharp scream. A combination of anguish and rapture thrashed through her system as he suckled her breast, drawing blood from her body. Hearing the sounds of his mouth taking the very essence of her life, was a bizarre dichotomy instantly stilling her as a quiet peace enveloped her system. Lying limp in his arms, she absently tore at his skin as she succumbed to him completely. Vivid images of a past 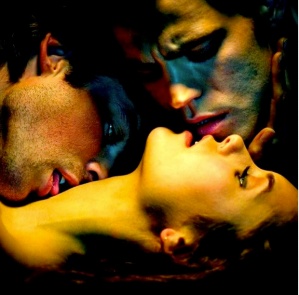 she’d never have flashed across her field of vision leaving her breathless with wonder.

Lifting his head, Constantine licked up from her nipple to her neck, tracing circle after circle around her pulse of life until he captured her mouth, forcing his tongue into the back of her throat. As their tongues entwined tasting the very essence of their joining, he grunted into the moment of heated passion and slid his hand down her side to her hip, finally wrapping his finger around the edge of her lace thong. With a single grunt, he ripped the thin material from her body as he gripped the back of her head, holding her in a dance of lust and death, taking her into a heightened level of awareness.

Savannah closed her eyes as his hand moved between them, his fingers brushing up and down her pelvis until he thrust two fingers inside her dripping cunt, plunging in and out in wild abandon. He was going to ravage her body, and every part of her mind screamed out to stop him, but her will was taken and wrapped around the man and his aura. This was exactly where she was supposed to be.

Breaking the kiss, he nipped her chin and eased back as he continued his assault in and out of her pussy, every move becoming more manic. “I’m going to take you.”

It wasn’t a question; but a statement of his ownership of the woman he’d waited for. Jerking her legs around his waist, he carried her through the house into her bedroom, knowing the way without question.

Through lazy eyes she watched him, every move the sultry man made as he staked claim. The moment he entered her bedroom and eased her down onto the bed, she reached out to him, hungry for the savage creature who longed to consume every drop of her essence. As he finished undressing and she gazed on his thick cock for the first time, Savannah whimpered. She’d seen his luscious naked form in her dreams so many times and yet now as he stood before her in full glory, she shuddered. Every part of his body perfectly shaped from his long muscular legs to his slender waist, the man was gorgeous.

FIND MY BOOKS AT