I Feel So Honored

From the cover artist – thank you very much Shane, to the editor and the publisher who markets and works their magic in bringing the book to the shelves, it takes time to produce quality work. This is wonderful for Naughty Nights as well as for me so I wanted to take a minute to say thank you to everyone. So in honor – here’s a taste of the first and the synopsis of the second in the trilogy coming spring 2013.

Bad Things is a sexuality training facility owned by a reputable businesswoman in Charleston, South Carolina but looks can be deceiving. In truth it’s a highly sought after club run by a sexy Were-tiger Domme with powerful clients who pay top dollar to be 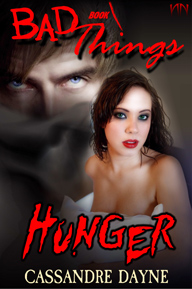 They want her blood. Christian Sowers is as ruthless as he is loved and will stop at nothing to get what he wants – including murder. Hiring a sexy attorney to act as a plant, he’s out for more than just information. A righteous man, he has his sights set on the Whitehouse. But is he the man he portrays himself to be or someone who nearly destroyed the Pride centuries before? Only Anastasia knows the answer. As a brutal mutilation of a young girl occurs fingers are pointed but the killer goes into hiding, taunting the entire town. In a time when the elders want to end their peace with man – what will happen to the Pride when the Devil returns for more?

I will hunt you down and finish what I started and this time you will die.

Anastasia Lucard’s breath caught as she stood glaring at the elevator, her hands shaking. This was the second time in as many days she’d heard the words. But had she really heard them? Turning her head slowly, she scanned the almost empty foyer of the steel office building as a trickle of fear raced down her back. It wasn’t like her at all to be terrified of ghosts but this one was back with a vengeance and ready to take her on until she and her kind were forced into oblivion.

She inched toward the bank of elevators and could swear she heard a dark chuckle from behind her. As she emitted a low growl she could feel her beast rise to the surface. Now wasn’t the time to lose control with several clients still in the upper chambers. Still, she was tired of being followed and being taunted. Her heels clipping on the marble floor she strode toward the elevator, slapping her hand on the up button. She tried to put the pieces together and had a distinct feeling she knew why this was happening now, but she was more than weary of fighting her nightmares and the damning visions, which seemed to haunt her every day. This was no way to live. Out of the corner of her eye a lone figure grabbed her attention. Anastasia stole a glance and had to admire the sexy man who gave her a smile and a silent nod before heading out into the darkened night. Recognition set in that she’d seen him before. “Tall, tanned and handsome” must work in the building. Then again, there were several tenants, though none nearly as stunning. Why did seeing him unnerve her?

Come on. Hurry the hell up. Willing the elevator wasn’t going to do the trick. She contemplated using the stairs but refused to allow irrational fears to overwhelm her. After all, she was a creature of the night. Chuckling, she heard the ping of the elevator and for a moment could envision the sensuous creature at her beck and call. Her lurid thoughts of fucking him hard gave her a shiver.

Stepping inside the steel box she eased against the back wall, the cool comfort of the wood paneling allowing her to exhale. Unfortunately she knew she was going have to face her ugly demons soon enough but she was terrified of the end. Swallowing hard, Anastasia brushed her hands through her damp hair and stepped off the elevator into the quiet of no activity. Her firm took up the entire floor and the unassuming entrance indicated nothing provocative went on behind the closed doors. Bad Things hid in plain sight.

Oh what the good people of Charleston, South Carolina didn’t know wouldn’t drag them into the fiery pits of hell. Right? Licking her lips she pulled out her keys and was determined to finish out the night with a smile on her face –— even if it killed her. Entering the facility, she could hear the soft strains of Spanish guitar coming from the speaker system located in the main salon. Anastasia tossed her things into her office and thought about the guest list for the evening. Senator Pyle was among the top of the who’s who of the rich and famous venturing through her hallowed doors. Usually she maintained a low profile but given the recent turn of events with some veiled threats, she knew it was a good idea to make sure the powerful politician was aware that she controlled his destiny. Whether or not he liked the fact simply didn’t enter into the equation.

Fluffing her hair, she tugged down her zipper exposing more of her breasts and headed for the man’s favorite room, the dungeon. As she checked her watch she knew he was probably just finished being flogged. And who was the Senator’s choice of employees to flog and fuck him? Kristoff Chenault, her personal man slave and current lover. He was also a member of the Pride but that was another nasty little secret the town didn’t know. How could they ever sleep at night if they realized an entire Pride of Were-Tigers lived in town and some were more than ready to snack on humans?

Anastasia opened the door and smiled. Eyeing Kristoff with the whip in his hand gave her pause. She loved the way the man wielded a long, leather strap. Then again, she loved almost everything about him.

“Oooohhhh! Yyyyeeessss… God… oh God.” The overweight man was shackled to the “X” cross, his back and legs marked with red and purple welts. Panting, his scattered moans were doing nothing but fueling Kristoff.

“I see he’s been a very bad boy tonight,” Anastasia cooed as she folded her arms and flanked Kristoff’s side. The rough-hewn blond was formidable, alluded sexuality and was one of her most sought after employees. For some reason men and women alike craved being flogged and used by the hulking man. Perhaps it was his brawn or simply his thick cock. Inhaling the aroma of both men she smiled. “Senator Pyle, I’m sure you’ve now paid your debt and realized the error of your mischievous ways?”

“You have no idea,” Kristoff stated as he cracked the whip across the floor.

Senator Pyle shivered and sucked in his breath. “I…oh Mistress, I so needed this.” His voice ragged, the sound of his chains scraping against the buckles of the cross mixed with the crackle of the leather and the effect was enough to force a bubble of saliva from his mouth.

“Yes, I can see you do.” Anastasia rubbed her hand down the length of the man’s spine and cooed. Slipping her finger down the crack of his large ass she winked at Kristoff. “I think he’s had enough and ready for what only you can give him.” Easing her finger just inside Senator Pyle’s dark hole, she wiggled the long digit back and forth. Taking her other hand she slipped it between his legs and cupped his already hard cock, stroking up and down. It was her way of reminding him not only why he’d come to Bad Things in the first place but also that she had his career, his future and his balls in the palm of her hand. “Yes, he’s more than ready.”

“Oooohhhh…” the Senator grunted as he clenched his eyes shut. Beads of perspiration trickled down the side of his reddened face.

Licking her lips she patted his ass and nodded toward Kristoff before closing the distance to her lover. She slid the flat of her hand up the length of Kristoff’s naked chest, marveling at his six-pack abs and carved muscles. He was a magnificent specimen and one she enjoyed tasting on a regular basis. Tipping her head she captured Kristoff mouth, pressing her tongue inside as she kneaded his chest and ground her hips against his. His twitching cock was her reward. When she broke the kiss she nipped his bottom lip, before taking the tender flesh into her mouth savoring the flavor. “Mmmmm …” When she pushed him back she grunted and gave Kristoff a heated look. “Yes, please take care of our guest.”

“As you wish, Mistress.” Kristoff narrowed his eyes as he nodded.

She watched from the background as Kristoff untethered the Senator and pushed him over a specially designed bench. Every piece was hand selected and the use chosen with each client’s particular needs in mind. And what delicious clientele they had. Bad Things was her dream and one she’d planned carefully over the course of several years. While always on the radar as being a sinful establishment, her careful selections of clientele and employees allowed her almost free reign to engage in her business of education. It was a mantra she liked to tell her customers anyway. Glancing at the wall she knew the hidden camera was rolling. The majority of her clients enjoyed their parting gift of their sessions forever captured in vivid color. Then again the movies and slides provided damn good protection for their promise of secrecy.

Humanity for the citizens in Charleston South Carolina was all but over. The Crimson moon waning, the devil himself had returned to take back control of the earth and all creatures were required to obey. Only one human woman could save what had no chance of being saved — if the members of the Pride were able to find her. For Anastasia Lucard, the new leader of the oldest and most revered were-tiger clan in the world, the loss of 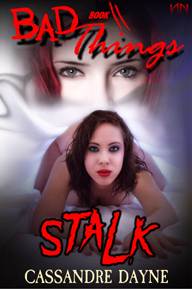 one so precious threw her into a heightened stage of rage and damning hunger. Determined to locate the precious woman, one destined to be the mate of her son, she entered into a life ending war involving humans and beasts alike. As the bloody battle ensued, she had only one man to turn to and his very humanity kept her sane as brutal murders raced through the ancient city. One thing she knew, she’d give her life to protect the ones she loved.

Trenton Parker was succumbing to the savage beast he had no understanding of how to control. As the realization of what he truly was settled in, he fought his heritage, desperate to find his way. Caught between a world of good versus evil, he’s torn as he searches for answers, blamed by the very man he’s forced to call his father. His one salvation the love of his life, he fights to save her before she’s swept into a life of servitude to the devil himself, from which she’ll never return. With the ancient curse of his kind snapping at his heels, he creates a plan, one that could cost him his life and damn his soul for all eternity. Could his desire conquer the blackness enshrouding the city before the final turn or would he lose the most precious gift known – love?

One decision proved too costly…

I so hope you enjoyed

3 Responses to I Feel So Honored