Secrets Behind a Closed Door…Indulging in Your Fantasies

I am Alexander – a teacher, a scoundrel, a voyeur and a true entrepreneur. In my world there’s little left to the imagination. That is if you dare to taste what only I can offer. Welcome to The Peeping Hole, where every fantasy you’ve ever desired will come true. Leave your inhibitions at the door and join us. But you must remember, whatever

happens here stays here and trust me, I will know…

Kade Thompson was sick and tired of working sixty plus hour weeks. After all he was only an accountant, not a surgeon. Still, earning a six-figure income had allowed him to indulge in his every desire, including toys and rather kinky bouts of sin. He also enjoyed an on again off again push and shove relationship with his boss, Trevor Willis. While the sex was passionate, he craved being dominated by the six foot six God and Trevor didn’t seem interested. Tired of playing games, he was ready to break off their relationship until an invitation to meet for a drink at The Peeping Hole, a mysterious and very exclusive club, had him more than curious. And when he found out the club offered every aspect of kink, he was breathless with excitement. As Kade waited for Trevor’s arrival, he was given an offer he couldn’t refuse and one that might sate his every craving – if he would submit to the man behind the mask. Unfortunately what went on behind the hallowed doors was required to stay behind them. But could they keep up their end of the bargain and one forged in a touch of black magic? Only Alexander knows. Ssshhh… No peeping.

Kade Thompson groused as he stared out the window of his office. Damn the week had been long and arduous at best and still there was so much work to do. Another sixty-hour week and he was exhausted, longing for a bottle of vodka and he was just about as pissed off as he could be. Somehow he knew his increasing anger had zero to do with long hours. Then again, every client had been a pain in the ass recently. Glancing back at his computer screen, he was at least grateful the list of files was getting smaller but shit, how many more clients was his workaholic boss going to take on? They weren’t freaking

surgeons after all. They were merely accounting personal, hired to make certain the ubber wealthy stayed that way.

Rubbing his eyes, he realized he should shut his damn mouth given the fact he made a hefty salary, but every day he couldn’t help but think about the fact there was more to life than sitting behind a solid mahogany desk. The thought giving him a chuckle, he glanced at his watch and decided to call it a day. Hell, it was Friday after all. The savvy, rich people could wait until next week. He wanted to enjoy a quiet weekend. You mean a boring weekend.

No, Trevor was many things including a fabulous lover at least when he took the time to be, but he wasn’t a Dom. Period. Nope. No matter how many hints he’d thrown or the actual conversations they’d had together, he could tell the man simply didn’t have it in him. He’d moved to his desires to have a ménage next and the guy had simply told him no. Now he laughed. No was one of Trevor’s favorite words too. He said no to days off and no to vacations or even full nights together. Then there was no to telling his family about their relationship and no to going out tougher with friends. No. No. No! Kade was freaking sick of no’s. Groaning, he threw his things into his briefcase and walked out of his office, closing the door with a soft click. There were a few diligent employees left at seven on a Friday night, but very few.

Kade inched toward the elevator and then the dark and very sultry voice caught his attention, stopping him in his tracks as the deep timbre always did. The sound also forced his cock to twitch every time and tonight the muscle was aching like a son of a bitch.

“Kade, I’d like to see you in my office before you go.”

Turning sharply to the sight of his boss, dressed to the nines in a slick Armani suit and silk tie that had to cost more than his Gucci leather briefcase, he groaned inwardly. “Yes, sir.” As he trailed behind the hulking giant he realized he was sulking. Why the hell was he sulking? Oh yeah, he knew why. The two of them shared an on against off again kink fest and lately he was tired of playing second fiddle to everything and especially the man’s business. Trevor Willis was a huge black man with a spectacular body and the sexiest eyes he’d ever seen. He also had a thick dick and one he loved to suck on for hours. Shuddering, he brushed a bead of sweat from his brow and stood quietly, awaiting the usual last minute instructions.

“Close the door if you don’t mind,” Trevor said as he sat down on the edge of his desk. 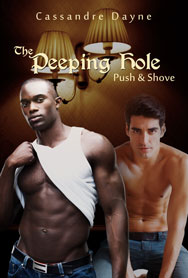 Mumbling under his breath, he closed the door and set his briefcase down. He had a terrible feeling the exchange was going to take longer than five minutes. There’d even been some berating lately since his numbers were down. This he so didn’t appreciate. He was damn good at what he did. “What can I do for you, boss?”

“Hmmm… You have more and more insolence in your voice around me. I’m beginning to think you actually want to be written up for insubordination.”

“Me?” There was no way to tell if the man was kidding based on the odd look crossing his face. “I…no. I’ll try and have a better attitude.”

Narrowing his eyes, Kade nodded and walked closer, continuing to try and figure out what was on the man’s mind. They hadn’t been out on a date in at least six weeks and the last time they’d had sex was… Hell, when was it? Closing the distance, he stood within a foot of the gorgeous man and had to resist stroking his groin. Not a single employee knew of their “special” relationship, nor did he truly believe any of them thought the ex-linebacker could be gay. “What do you want?”