Could You Handle a Kink Club?

Well my characters in Game Over have to face this question. My hero will do anything to keep his lover, the man of his dreams, even if it means sharing him in a kink club and one specializing in discipline and heavy domination. And he has to be very careful, given he’s a highly decorated detective in the Philadelphia Police Department. Hmmm… Decisions.

This book is coming in a freshly edited re-release on Sunday and it has the honor of being made into a trilogy now. I’m currently working on the second book – Cold Play. And the second and third are going to take these characters in a new direction, one that will shock you. So enjoy a long excerpt and remember, we all hide behind a mask of some kind, don’t we?

Tony Dartanion relished his life but he kept his private life hidden from the majority of the world. A decorated detective in the grittiest precinct in the Philadelphia police department, he was hungry to make Captain and willing to do almost anything. 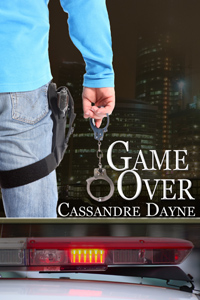 Unfortunately the old boy’s school had a don’t ask, don’t tell policy that enraged him and yet he kept his sexual appetites concealed. The boys in blue believed that he was a card-carrying man that desired all things in a skirt and stilettos. The truth was that he was in love with a man and one that he barely acknowledged outside of their bedroom. Caelen Tomlin was tired of being a dirty little secret.

Caelen gave him a mischievous gaze and shook his head. “Old argument. I’m in charge.” Pointing his finger, he swayed his hips back and forth. “Not only do you know it, you crave for me to take you over my knees to spank that Italian Stallion ass of yours. Whew, getting a little steamy out here.”

“I suggest you not tease me tonight or you will pay.” Yet Caelen was right. The decision about who was the top in the relationship had been an old argument since they’d gotten together. Sparring was the last spark in their wicked tryst.

“Are you man enough to take me?”

“You’re on fire tonight and don’t push me cause I’m gonna push back.” Tony hadn’t even been looking for a steady guy in his bed. Hell, he’d been just coming to terms with the fact that he embraced being gay and then Caelen Tomlin walked into his life.  The stunning cover model, dancer and aspiring actor was nothing short of perfection. Tony fought the possibilities then, knowing what he was going to have to face around the guys. So th two men toyed around getting together for three solid months, playing a sizzling cat and mouse game long enough for Tony to check Caelen out thoroughly. Perks of the career. Caelen was clean, he came from a good family and smokin hot. Standing six foot three with perfectly toned muscles, long shaggy blond hair and the most dazzling emerald green eyes Tony had ever seen on a man, Tony salivated thinking back to their first meeting.

And their first hard fuck. Inhaling deeply, Tony could almost smell the scent of the Italian restaurant from their first date. By the time they finished a bottle of wine, they were so damn hot for each other Tony dragged Caelen into the alley.

“You want me?” Tony hissed, licking his lips.

“The question is, can you handle me?” Caelen preened, sliding his hands down his chest, teasing. Inviting.

“I suggest you come here.”

to his chest, crushing his mouth as he cupped his chiseled ass. Forcing his tongue to the back of his throat, Tony tasted the sweet essence of spiced rum as his cock swelled. Then Tony pushed him hard against the brick wall and broke the wicked moment of passion, staring at Caelen wild eyed. “I’m going to fuck you.”

Caelen panted and glided both hands down Tony’s chest to stroke his cock. “Why don’t I fuck you first?”

“You’ll get your chance later.” Taking a step back, Tony unfastened his skin-tight jeans and nodded to him. “Better get ready or I won’t be gentle.”

Grinning wickedly, Caelen began a little dance of lust, strutting back and forth as the shimmering moon cast a luminous haze down across the darkened space. Tugging his belt free, he swayed back and forth as he slowly unzipped his pants, grazing one hand under his body hugging violet silk shirt.

Tony had never been as hungry for any human in his life. “Hurry, I’m famished.” He pulled out his cock and stroked in fevered motions as he continued to watch the shameless dance.

Caelen opened his button fly, revealing the lack of underwear.

Sucking in his breath, Tony narrowed his eyes as Caelen pulled out his cock. The long thick muscle was a thing of beauty and one Tony wanted to taste, but at the moment, it was Caelen’s lily-white perfect ass he wanted to take…hard. “Bend over and brace the wall.”

Tony raised his eyebrow as he laughed. “You’ll learn.” Stalking him for several sinful seconds, Tony used the power of his upper body strength to push Caelen against the wall, forcing his legs as far apart as the dense material around his knees would allow. Glancing up and down the alley, Tony knew he was risking more than just getting caught. He was endangering his career but his hunger, his need was too great.

“ Shit…you are…” Caelen palmed the wall and threw his head back, lifting his naked ass into the chilly air.

Tony rubbed his ass cheeks, enjoying the way his hard curves fit into his hand. Running his finger up and down Caelen’s crack, he wet the fingers of his other hand and slid them to Celen’s dark hole. “Gonna take you hard and fast, brother. Sure you can

handle what I can dish out?”

Wasting no time, Tony sliced a single finger inside Caelen’s ass, pushing past the tight ring of muscles as Caelen groaned.

“Shit!” He clawed the brick and dropped his head, arching his back.

“God, so damn tight. Can’t wait to taste that sweet little rose bud of yours,” Tony grunted as he reached around and cupped Caelen’s fully erect cock. Every part of him tingling and he quivered as he inserted a second finger inside, pulsing in and out. As Caelen’s ass muscles gripped around Tony’s invasion, Tony closed his eyes and relished the scintillating moment of being with a man. He picked up his pace, the force pushing Caelen into the wall again.

His heart thumping wildly, Tony grunted like the caged animal he was and lifted his cock, placing the tip at Caelen’s tight entrance. “Oh yeah, you’re one delicious fuck. I’m going to enjoy this.” Pressing it inside, Tony threw his head back and roared as he impaled Caelen in one hard drive, nearly slamming his head into the dense bricks.