Would You Allow Him To…Untame You?

Have you ever met a man, who was is just oh so sexy as hell, that even though he’s a complete stranger you’d honestly consider having him to anything he wanted to do? Come on ladies…fess up. I know I have. More than one. We’ve all had those dazzling fantasies about strangers who take us hard in some dangerous place – where we could be discovered by anyone and everyone. Delicious, eh? Well my “Un” collection gives you all that an more. This is about women who finally let themselves go – whether to a stranger, a younger man, a rough and tumble couple of cowboys or two cops, who are going to put her into line. I have the third in the collection just getting ready to be released. I’ll give you a snippet or to and remind you about the other two that are out and um very, VERY hot. Let your imaginations go and get ready to ask him to…

For bank owner Jennifer Reynolds, life was almost perfect. She lived in the finest house in a pristine neighborhood in Atlanta, surrounded by all the toys and treats money could buy. Respected by her peers and thrilled with her employees, everyday was a challenge in the best regard. Life was also boring as hell. Recently divorced, she’d taken her cheating-lying-no good-piece-of-trash husband to the cleaners and then some. Now she was back on track and attempting to date. For all practical

purposes she should be happy. Sadly, no one knew the inner girl, the one who craved being owned and disciplined. She longed to be collared and obey one man, giving him every pleasure imaginable. The thought daunting, how could she allow the real woman out when everyone thought she was a powerful, extremely conservative and very dominating soul?

Stephen “Taz” Parker was a pool cleaner and while he hated the job, the security paid the bills and allowed him time to paint. Art the only love of his life, he was determined to make something of himself. Barely twenty-five, he had time, or so his friends continued to tell him. He was also lonely and hungering for a significant other but few women could handle his particular brand of kink. Preferring older women, the moment he met the luscious Jennifer he was hooked and determined to cut through her straight-laced ways. Cleaning her pool became the one job he adored if for no other reason than catching a glimpse of her voluptuous body. Sadly, she was rarely ever home. There was something about the woman that ignited every passion and his gut told him she longed for a strong man who would encourage her to explore every fantasy. When a chance meeting one sultry afternoon occurred out of the blue, he was determined to find out – at any price.

“No problem, Ms. Reynolds. I won’t bother you again.”

Jennifer listened to his words, his powerful thoughts, and sighed. Then she grew more and more infuriated. She heard him walking away, not even fighting and she became more incensed by being used. How dare a man flirt with her and try and seduce her? How dare any man act like she was a piece of art? Dumping her things onto the chair, she hustled toward him, her long legs pumping. When she was within reach she wrapped her hand around Taz’ arm and jerked him backward.

Taz turned around with a start.

“Asshole!” Without thinking, Jennifer reared her arm back and struck his face in a harsh slap, the sound reverberating into the air. “Asshole.”

Pressing his hand over his cheek, he narrowed his eyes, but said nothing. In a few seconds he lowered his hand and started to turn.

My God, the jerk-off was going to walk away again. Seeing stars, anger swept through her body. She thought about the discovery with Eric, the insanity of all the ugliness with her divorce and now this and reacted, attempting to slap him hard again.

This time his reactions were much faster. Snapping one hand around her wrist, he growled. “No you don’t. You will not treat me this way.”

“Like hell I won’t.” She raised her other hand.

Taz managed to have her other wrist in a hold in a split second. Closing the distance, he maneuvered her arms behind her back and held both wrists in one hand. “I said…no.” 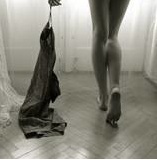 Between the shock of how strong he was, the closeness of his body and the commanding words, she was unable to say anything. Jennifer was vulnerable and for the first time in her life, she found herself giving in. Blinking, she darted her gaze downward. The split inside her soul was having such a difficult time accepting. Hissing, she shook her head. “No.”

“I said no,” she snipped as she struggled. A moment of re-energized fury sparked her combative nature. She was so turned on and her heart racing, she wanted nothing more than to challenge him. What would he do? “What do you think you’re doing?”

Twisting her wrists, he reached up and cupped her breast. “Anything I want to.” Crushing her mouth with his, he immediately tilted her back as he squeezed her breast.

Moaning, she wiggled in his hold, completely aware of the fact she wasn’t going anywhere. She couldn’t stop her shivering as she shifted her legs, kicking out involuntarily, but the fact he was taking her roughly, controlling her made her pussy quiver.

Pushing his tongue inside her mouth, he grunted as his finger tugged at her bikini top.

The sound or ripping material made her tense. When he slipped his hand around her naked breast, caressing and fondling, she clenched her eyes shut, knowing he wasn’t going to take no for an answer.

Taz held her tightly as he pinched her nipple, twisting the tender flesh until she whimpered. The passion continued, their tongues entwining. When he broke the kiss he nipped her lower lip and moved his hand around to her back.

Within a few seconds he untied her bikini top strings surrounding her neck. The second air hit her nipples she opened her eyes. “Ooohhh…” Jennifer inhaled deeply, the exotic scent giving her chills.

Using flair, he untied the back, yanking the top away from her body. Growling, he grabbed her hair, tugging back her head and exposing her neck. “I want you and I’m going to have you.” Licking across the seam of her mouth, he growled, allowing the husky noise to continue for several seconds. He pulled her groin against his, grinding his hips back and forth.

“Oh…” The feel of his hard cock pressing against her groin was a powerful aphrodisiac.

Taz licked down the length of her neck as he tugged her back into a deeper arch. He kicked her legs apart and lowered down his head, taking her nipple into his mouth and biting down.

“Shit…ohoh…” Jennifer closed her eyes, panting as a moment of pure pain washed through her followed by a tingling sensation skating down her spine. She wiggled her arms in an attempt to get away, but the truth was she wanted him to devour every inch of her body.

As she sucked on her nipple, he let go of her wrists and hair, sweeping his hands down to cup her ass. Grunting, Taz drew her onto her tiptoes and ground his hips back and forth.

“Taz,” she whispered, her blood racing through her veins. Grabbing both of his arms, she dug her fingers into his skin as she tilted her head back. A deep part of her psyche knew she should stop this before it went any further, but she wasn’t certain she cared any longer. She needed to feel alive again, wanted. And more importantly, she needed to be dominated. “I want to please you.”

“And you will.” He eased one hand inside her bottoms, caressing her ass and he moved to kick and lick her other nipple.

He seemed to sense her growing needs and eased two fingers between her waistband and skin, slowly maneuvering her bikini bottoms down her thighs to her knees. As gravity took them to the deck, he lifted her gently, kicking the material aside.

Danni Fuller is a professional dater, at least she should be given she’d been on about a bazillion first dates in her life. Oddly enough they almost never made it to a second. Her friends told her she was too brash and far too wicked in her ways to garner a man in the very southern town of Macon Georgia, but she scoffed. She refused to follow the rules, no matter if they were registered with the Sheriff’s Department or not. After a particularly scathing date with a politician’s son, she called her best friend to

commiserate and drag the guy through the mud over a bottle or two of wine. Then she received a reckless driving ticket on the way home and she knew all hell was going to break lose – by her hands. Didn’t matter she got to lay her eyes on two of the sexiest men in the world.

Officer Santos Garcia had it bad for the feisty Danni, a woman he would love to have in his life, but first he’d have to tame her. That is if he could even get close to the rather uppity female. After almost forcing her off the road to get her to stop before killing someone on the road, he was ready to tie her down and teach her a lesson about excessive speeding. When a call came out of the blue, asking for assistance in corralling the vixen, he enlisted the scandalous help of his partner in setting up a court of law of his own making. After all the punishment should fit the crime.

Cristal Collier was hungry for a man, but her cheating ex husband had left her for a blond twenty-something vixen and her self-esteem was shot. Her friends were tired of putting up with her hiding in the dark confines of her home and were determined to ignite a fire. During a sinful Christmas party, a naughty rouse was put to the test and her best friend Wendy knew exactly how to jump start Cristal’s love life, or at least

garner her a wicked tryst. She knew her brother was Cristal’s secret fantasy and one she refused to explore. During the sinful white elephant gift exchange, the cards were stacked.

Thorne Mitchell was sixteen years her junior and had a serious crush on the stunning copper haired beauty. After a shared kiss years before, she had pushed him out of her life and he had fled the state. Now, he was bound and determined not only to seduce her, but also win her heart. After engaging in a shameless round of sex including a moment in front of their friends, she refused to see him again. Planning a scintillating game of his own, he pulled out every stop, but Cristal couldn’t take the heat. As an early snowfall blanketed the twinkling lights of Baltimore, he finally gave up, going home to soothe his soul. He knew Santa Claus wasn’t coming to his house that year. Would he ever be able to unwrap the precious gift again?

So what do you think – could you let go completely?