For any of you who know me, you truly understand I love vampires. My way is much more brutal than anything you’re used to indulging in – that is as far as with books… I like to brutally kill people in my books and well my vampires might engage in a little sex and sin, ultimately they have one goal in mind – taking your life. But what if they’re forced to keep their identity a huge secret? What if they are required to interact with humans in a decidedly human way yet can perhaps use BDSM as a method of satisfying their needs. That’s a bit of the premise with my next Dirty Little Secrets… Coming in two little days. Enjoy…

Born of fire. Ending in fire…

For all that you think you are, you’re wrong. Your life is not what you know it to be. Embrace the inevitable or die. Become… Champion death as you have life and you’ll rule the world, one full of men who have no understanding of honor. This is your destiny.

“Shit!” Caldre Parker hissed as he ducked the falling piece of timber. The blaze roared out of control, no matter how many hoses they had pointing at the wall of fire. Sweat

and soot continued to roll down his face, beads dripping into his eyes. He lifted the hose over his shoulder and motioned the firefighters behind him, barely able to see. They had to go deeper into the bowels of the building. As the maneuvered their way over a series of fallen beams, he finally knew he was in the most effective place and turned on the hose spigot. The full spray of water hit the flaming licks, creating instant steam.

He sucked in his breath and inched forward, holding the stance. He could hear the calls as others from his Engine Company swarmed the expansive space. His instinct told him the structure was a total loss. The only saving grace was the building was abandoned, the site sitting in the old warehouse district. Still, the danger was real to the men and women who worked with him. Panting, he pushed forward, determined to contain the burn.

Several minutes later he stopped the spray briefly, analyzing the remaining fire, then moved to the right. They were finally making real headway. As they continued their path stepping through piles of debris, mostly in place long before the fire started, he was careful to lead the team through and finally out into daylight. When they were in the clear he jerked up his facemask and turned to face what was left of the already dilapidated brownstone. There was massive destruction not only to this building but the one adjacent we well. “Oh fuck.” The other space was in the process of being renovated. The owners would have to start from ground zero. This was another blow to the already downtrodden area.

Eyeing his best friend, the first in Company 10 who’d welcomed him with open arms after his relocation, he shook his head. “How so, Draper?” He had a ringing in his ears, one that seemed to be there almost every day. Fulfill your destiny. Shaking his head, he was damn tired of thinking the words over and over again. He had no destiny, at least one he could figure out. But shit he’d been trying. Somehow he thought saving lives would end the constant need, nagging at his very soul. There were days he felt 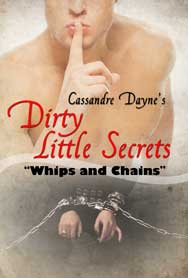 “The fire coulda gotten that snazzy Ferrari over there,” Draper chortled as the pointed across the street. “Now, that would have been a pity.”

“What in the world is a Ferrari doing down here?” Caldre asked as he narrowed his eyes. “This area is full of abandoned buildings and little else.”

“Expensive real estate. I heard there’s some rich conglomerate looking at buying up the entire block for some big sports facility. They could sure get this crap down here for a song. Good area. Close to the interstate.”

“You need to sell real estate. You sound like a freakin’ commercial,” Caldre teased and glanced up and down the street. A sports facility would be a damn good idea. The gyms being used were run down and in need of refurbishing themselves. Still, Cleveland wasn’t the hot mecca for moguls dreaming to own a crime-ridden part of town.

Draper sniffed and gave him the finger. “Let’s just say I have interest in something other than fighting fires. Besides, it’s a great area and someone with attention to detail could really do something with this area.”

“Yeah, especially if the buildings keep burning down. Then the big wig has a blank canvas to work off of.” Caldre handed off the hose and jerked off his helmet. He was suspicious of anything that smelled of arson. Abatement of asbestos had been the single reason so many of the all but abandoned structures weren’t being snapped up. The cost was off the charts.

“Whew, buddy. You’re raring to go today. Save it for later when we go out today scoping for the ladies,” Draper howled as he tugged off his jacket. Shaking out his hair, he grabbed a towel, wiping his face.

Caldre gave him a look before turning back to look at the car. He could just make out a person coming out of the building down the street, heading for the smokin’ car, his long dark hair flowing in the wind. For a second his pulse raced as the man turned. “Fuck me…” He could swear the man was studying him. His throat was suddenly dry, his stomach churning.

What the hell? Had the stranger spoken to him? Blinking furiously, Caldre sucked in 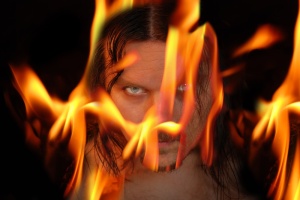 his breath, every inch of his body tingling. What in the hell was he having this strong of a reaction?

Soon? Soon for what? Christ. Maybe he was losing his flippen’ mind. He couldn’t help but watch as the man in a suit climbed into the car and could swear he heard the roar of the powerful engine. Maybe it was just wishful thinking, longing for finer things in life.

“Earth to big he-man fighter. You are coming out tonight, right?”

“Huh? Coming out where?” Why the car being in the neighborhood bothered him so much he wasn’t certain, but his hackles were raised.

Draper slapped him on the arm. “With the guys. You know going out and having a little fun since we’re off tomorrow?”

Turning quickly, the question broke the trance. He trailed behind Draper as he unbuttoned his jacket. “Can’t do it tonight.”

“And the excuse this go around?”

“What excuse? I just have stuff to do. You know I’ve been studying lately.” Caldre had to come up with better excuses. The single exam for the class he’d been taking shouldn’t create this much need to study but he had no idea what else to say. He had no family and no other friends than the guys in the department. Ideas were getting slim.

“You’re pathetic. If you’re seeing a lovely lady, all you have to do is say so. We are guys. We get it. Fucking comes first if you ask me.” Shaking his head, Draper mumbled under his breath as he tugged off the rest of his protective gear.

Giving him a two-finger salute, he grinned. “I do try.”

“Uh-huh,” Caldre breathed. He wished he could tell his buddy the truth, but he wasn’t ready for the harsh scrutiny. “Hey, I’m sorry. Next time. Promise.”

Pointing his finger, Draper growled. “Gonna hold you to it.”

Born of Fire… Ending in Fire…

Sakima Mato was wealthy and highly respected within the ranks of Mixed Martial Arts. His American Indian heritage kept him spiritual, yet a fire burned deep within his soul. Well known for his signature techniques within the brutal, his methodologies of training were considered savage. His mysterious aura was the darling of tabloid fodder, but few knew the real man behind the mask and fewer still could handle the brooding creature underneath the sensuous persona. If his dirty little secret was ever revealed, he would be hunted like the monster he’d become all those centuries before. After all, he was a vampire, scouring the streets for blood and sex, and for a human companion to ease the loneliness, what some called destiny. But he knew, one forged in savagery. A curse followed him and had since his transformation into a monster, one that offered him a chance to become very human, if he believed.

Caldre Parker was a fireman by day, a martial arts fighter by night, hiding his penchant violence from all who knew him. His standings stalled at the bottom of the heap, he needed a new mentor or his second career would tank before it even started. Dark and angry whispers about his destiny trailed behind him, torturing until he was left a shell of a man. Fighting eased the pain. After meeting Sakima, he was intrigued by the seemingly haunted man. The attraction was instant and they fell into a heated tryst, one involving pain as well as discipline. As his fighting career became headlines news, Caldre was forced to learn the ugly details about his lover. Demons of his own haunted his every waking moment as an unknown illness plagued him, driving him into near madness. Suddenly everything he respected and held dear about human life was called into question and he was forced to choose – life or soulless immortality.