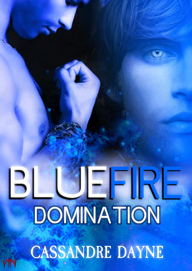 a D/s relationship while unwilling to accept Aleks is a creature of the night. As the horrors mount, terrifying memories of his childhood haunt Jax including shadowed whispers of some ancient culture.

As another young adult is found with a second connection to the club and to a group of prominent politicians, Jax has no choice but to go undercover with Aleks posing as a couple. While the killer continues his reign of terror he leads them down a twisted path of dark secrets until both men are faced with an uncertain future. Unfortunately the monster enjoys their game of cat and mouse and both lives are slammed into the path of the killer bent on revenge and on securing the ancient Kingdom that Aleks denies. As Jax is finally forced to face not only his needs but the ugly reality that Aleks is a vampire, he has to make a the most difficult choice of his life, complete domination or allowing more innocent humans to die.

Aleks cocked his head and glided toward the young man, studying the boy’s young face. “Dillon is it?”
Swallowing hard Dillon nodded as he blinked furiously and with shaky hands put the piece back into the crate holding a myriad of block and white shots.

Aleks could hear the boy’s heart beating rapidly in his chest and could not only smell the ripe scent of fear but the rich blood coursing through his young body. He was very hungry tonight and Dillon would make a perfect snack. “And you’ve never modeled?”

“No. I would love to but tough to get into. I um…well, I had a friend take some shots but never did anything with them.”
The boy had the looks. Tall and blond with the all American look Aleks could quite possibly make him a star. As the first stirring of his cock pressed against the tight linen of his pants his incisors elongated from his gums. He’d been a fool not to feed but he feared discovery of his kind more than the anguish of needing blood for life. “Why don’t we simply get to know each other tonight and then if we’re both comfortable we’ll take some test shots later. Fair enough? Besides, it’s very late. You should be careful walking the streets alone at night. There are monsters lurking in the darkness.” Dragging his tongue across the sharp canines he forced down the beast and gazed at the boy’s mouth. Dillon’s swollen ruby lips were perfect to wrap around Aleks’ cock. Inhaling, he smiled as he licked his lips. This one was fresh and untainted from drugs. Perfect.

Dillon nodded as the corner of his mouth twitched. “I work late at the club and normally I have a ride but my roommate is out of commission for awhile. I don’t live far.”

Aleks chuckled. It wasn’t about trust as the boy had no idea he’d been induced into coming with a monster and while he could certainly overpower the much thinner young man Aleks preferred to have them willing. At least somewhat. Closing the distance he gazed into Dillon’s eyes and smiled. How delicious. The boy was more than curious. Tonight’s feast and fuck would be a bit easier. For that he was grateful. Bone tired he would need several feedings before he would have all of his strength and powers back. “You will have a drink.” It wasn’t a question but a commanding of

“Of course. Anything.” The ice somehow broken Dillon smiled easily as he continued gazing at the telling art. His fingers traced down the length of a black and white depicting a specialized spanking bench. His legs trembling he snuck a glance at Aleks before swallowing hard.

Aleks watched his reaction and inched behind Dillon, allowing the tip of his finger to graze down the boy’s spine. “One of my finest pieces.”

Chuckling, Aleks moved back and allowed the boy space. As he prepared them both a drink he called out to Jax again. He longed to see the stunning cop who’d risked his life to save others. He’d respected Jax’s need to process and to remain alone but apart their respective enemies could kill them both. Unfortunately their paths were going to have to cross again soon. While Durac had given him enough information about the future, he could smell this was completely a different set of players. The question was who else was after him?

He sighed as he thought about Dark Towers. The club was set to open in two nights and he wasn’t sure he had the energy to run a club but the vantage point alone could prove to be beneficial. If another dark force was in town they’d find him in a kink club easily enough. Perhaps he owed Felicity anyway.

His hunger becoming almost desperate Aleks slipped in the special powder. He might be a monster to some be he refused to do harm when it wasn’t necessary. There was no doubt be preferred compliance in his submissives and one so young couldn’t understand his rather dark needs. Lifting the glass he swirled Dillon’s drink until the trace amount was undetectable before taking a sip of his drink, savoring the burn of the single malt scotch as it slipped down his throat. As he carried the glass to the boy he contemplated exactly what to do with the delectable creature.

“I hope this is to your liking. It’s been awhile since I’ve had company,” Aleksandr breathed as he held out the glass.

The instant their fingers touched Dillon sucked in his breath and locked his eyes with Aleks. Nodding, he brought the crystal to his lips and gulped, downing more than half the glass before turning away. “Are you coming on to me?”

“I just…I can tell with a man, you know? Not that I’m anything special but I get some of it at the club.” Dillon took another gulp of his drink and hid behind the glass.

“What do I want?” Aleks emitted a long growl, the frequency barely audible as he licked the rim of his glass.

“Yeah.” Lifting his head Dillon refused to blink, his eyes turning to ice.

“I enjoy a man who understands the game. What is want is exactly what only can give me and I think it’s something you crave, the darkness, the need burning deep within your body and your soul.” Aleks took a step forward, his eyes never leaving his prey. His cock twitched aching for release. “You’ve had the moment in your life where you knew you need something that only a man can give you. Isn’t that right?” Cocking his head he licked his lips, sensing the drug already taking effect.

“Yes.” Dillon took another gulp of his drink and lowered his gaze.

“As a boy your hungers were much difference than those of other boys, weren’t

they?”
“Yyyeeeessss.” His voice barely audible Dillon brushed his hand through his hair.

Aleks closed the distance. The scent of the boy’s sex permeated the air electrifying his body. A single crackle could be heard above the din of the music. He was becoming the savage monster who dwelled within. “Are you ready to experience a level of rapture you’ve never experienced?”

Barely nodding Dillon swooned back and forth, his body shaking as he licked his lips.

Aleks would never be the soft lover, the romantic man. He was no longer allowed the luxury but he wouldn’t destroy a boy who offered not only sex but food. He took the final gulp of his drink and drew the glass out of Dillon’s shaking hand. Setting both down with a thud he circled the boy, inhaling the subtle fragrance of shower gel and hairspray and could see into the boy’s psyche and what he was thinking. “Is your cock hard?”

Tipping his head back Aleks snarled allowing his fangs to fully erupt as he took a single finger and brushed the tip down the side of Dillon’s face as he moved in front of the boy. Lifting Dillon’s chin, he pursed his lips before showing just the tips of his fangs. Instead of terror, this time the boy nodded as if he’d always known creatures of the night existed. “You now belong to be and you will obey. Do you understand?”
“Yes.”

The single word of acceptance was all Aleks needed. “Come to me.” There was something quite magical about seeing a man accept the dark needs that lived inside freeing him of all responsibilities of humanity for even the briefest of minutes. As the boy trembled he stepped forward.

“What do you want?” Dillon’s voice was barely audible.

“Remove your clothing.” While there wouldn’t be any playtime tonight Aleks would still be able to enjoy the sheer joy of experiencing a young body. As a shimmer of moonlight flowed in from the floor to ceiling windows he was able to admire Dillon’s lithe body and long legs with carved hips that framed an almost perfect set of thighs. And show cased a long, thick shaft. Sucking in his breath he admired the boy in all his glory as he wrapped his hand around Dillon’s neck, drawing him forward. “If you’ve ever wanted to know what the taste of immortality is you will.”

A single whimper escaped Dillon’s lips as he pressed his hands in front of his groin, covering his cock.

Aleks grunted as he brushed his lips across Dillon’s and the flavor of the boy was almost too difficult to resist. Closing his eyes he licked across the seam of Dillon’s mouth as he breathed a swath of hot air. He could hear the boy’s heart beating rapidly from the drug and desire and purred as he pressed his tongue inside. Their tongues entwining Aleks grazed his hand down the front of Dillon’s chest to his hips, sliding his fingers back and forth from one hipbone to the other.

He held the boy tightly, his nails digging into Dillon’s tender flesh as he cupped Dillon’s balls, squeezing until the boy cried out. Nipping the boy’s lower lip the taste of his blood sizzled Aleks until he was left breathless. Every nerve on fire he hissed as he pulled back from the kiss and stroked Dillon’s cock. “Drop to your knees and suck me.” Savoring the drop of blood, he licked his lips and snarled, dragging his tongue across the tips of his fangs. There was something about the boy’s taste that was exquisite and quite powerful.

Swallowing hard Dillon gazed slowly down toward Aleks’ cock as he tongued his lip, his body shaking. “Yes, sir.” He eased onto his knees and kept his gaze on Aleks’ face as he fumbled with the Russian’s belt, fumbling to open Aleks’ fly. “I’ve never done this before.”

Aleks tilted his head down and smiled. “You’ll learn.” The second Dillon freed Aleks’ cock the vampire grabbed his head, intertwining his fingers in the boy’s hair as he jerked him forward, forcing the boy between his legs. He ached more than he had in so long and his there was no doubt he could barely hold the monster at bay from ravaging the boy.

Darting his tongue out Dillon licked the tip as he settled between Aleks’ legs, his fingers kneading the length of Aleks’ shaft.

Aleks closed his eyes and imagined Jax tasting him, sucking him and it was all he could do not to impale the boy’s mouth. “Yyyyeeesss…”

I hope you enjoyed and don’t forget to comment for a chance to win a book or two!