Mmm – you know how I like all things dirty and kinky. Right? Well, I penned a sexy little collection a couple years ago that did well. Think about having a wicked tryst in the middle of the afternoon? Imagine something so unexpected and very tasty. I think we could all use a bit of sin in the middle of the day. Don’t you? Well, as time and the business of writing would have it – the rights to my saucy selection were given back to me. They have brand new HOT covers, have at least a couple thousand more words to add to the spice, and they’re at a very low and on-so tasty price of $.99. What could be better than experiencing a dirty little lunch yourself? Take a taste of two…

Brushing his hands through his hair Montana Devereau eyed the clock and sighed. Thank God it was Friday and five o’ Clock couldn’t come soon enough. He was more than ready for a sinful weekend. Who was he kidding? How many months had it been 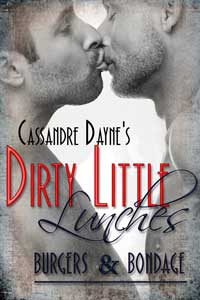 since he’d had a truly good time? Sniffing, he couldn’t remember the event – if there was one. Hell, today was his damn birthday and he had a feeling he’d be on his ass tonight drinking beer and watching basketball on television. What a way to turn thirty. His fault. He was the one who kept to himself. Few good friends and no boyfriend made for a very dull boy. Yep. He was a loser.

Groaning, he inched his chair closer to his desk, determined to finish the project on time and under budget. Hell, maybe he’d get a promotion out of the lousy month. Wouldn’t that be a kick-start to his life? Who was he kidding? As he shuffled the papers in the inch thick file and concentrated on the numbers bursting from the computer screen, he thought about what a real birthday celebration might entail. Funny, his thoughts had nothing to do with accounting numbers or signed contracts. Nope. He slid the tip of his pen back and forth across his mouth. Hot sex. That was the ticket for a perfect birthday event and he had one dazzling man as the fantasy boy. As if the guy even knew he existed.

“Hey, Montana. A couple of the guys are going out to lunch. You wanna come snag a few burgers?”

“Now?” Montana eyed Brad Swimmer and every part of his body twitched. The man was talking to him? He wanted to look down, to see if he was on fire or perhaps naked and he didn’t realize it. The man never talked to him. Never. The earth could come to a shattering halt and Brad would pass him by.

Every time he saw the guy he was as turned on as he’d ever been. Between Brad’s six foot six chiseled body and shaggy blond hair accentuating his ice blue eyes, Montana maintained a continuous hard-on for the guy. He stole another look at the clock, buying time if nothing else. A frog, a dog and pretty much every other creature on the planet was lodged in his throat, holding his vocal chords hostage.

“Yes, now. I was told in truth not to allow you to back out again so get your ass into gear. We leave in ten minutes,” Brad gave him a heated gaze as he tipped his head. “Ten minutes and not one second late. You got it?”

Was Brad coming onto him? No. There was no way. His eyes opening wide, Montana stayed frozen like some artic Popsicle and nodded over and freaking over again.

Leaning over his desk Brad kept the grin plastered to his face. “Don’t back out, pretty boy or your ass will be in a sling.”

“Ten minutes. No problem,” he managed to chirp. Shaking away the crazy thought he simply smiled and nodded and as soon as the man walked out of his office Montana exhaled slowly and dropped his head into his hands. “My God. I’m a complete moron.” 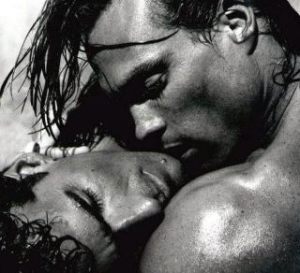 “That bad, huh?” The mischievous glint in the man’s voice was followed by a deep chuckle.

“Funny.” Raising his middle finger Montana knew exactly who was behind the mischievous husk, Taylor Hastings – the only man who knew about his craving for all things Brad. “Don’t start with me.”

“What do you mean start? You’re the one who’s flushed and shaking.”

“Shaking?” Snapping his head up he could see a very calculating look cross Taylor’s face. “Why do I think you have something up your sleeve?’

“Who me, birthday boy? Never.” Taylor shook his head. “Why don’t you just tell Brad that you want to suck his big cock? Today is a great day if you ask me.”

“How about we type a memo to the rest of the staff who might not have heard?” Tossing his pen he stole a glance around the perimeter. Maybe there had been office water cooler fader at one point. Maybe. At least no one seemed to give a shit today.

“You’re in a big ole office, unlike the rest of us I might add. Who will hear?”

“You have a screeching voice.”

“Just tired and I don’t care its my birthday.”

“Since when? You practically ordered all of us to your big party last year.”

“That was last year.” Everything had changed in Montana’s life since then.

“Think of it this way. You’re turning thirty. Soon you’ll be sixty. Time to take the bull by the thick shaft. Live a little.”

“Thank you so fucking much for the vote of confidence.”

“Anything for my best buddy.”

Montana climbed to his feet and scanned the area just outside office. “Seriously. Why in the hell is Brad giving me the time of day. Doesn’t he have a regular snack in Tim or Tom or something?”

“His name was Wilfred Manning the third and the asshole is old news. If you’d come out with the guys more often you’d know that,” Taylor chastised as he leaned over Montana’s desk. “If you ask me I think the guy has the hots for you. In fact I’d bet my entire paycheck he does.”

Montana snorted and tossed his pen across the desk as he paced back and forth. “You’re smoking crack again and I wouldn’t take that bet unless you want your pretty ass out on the street.” Okay, so he’d noticed the blond God had eyed him more than casually for weeks. Could it be possible that… Shaking the rather lurid thoughts out of his mind he eyed the computer screen and shook his head. Work could wait. He was ahead of his deadline at this point. “Lunch out would be good.”

“That’s good ‘cause the ball and chain doesn’t go very well with your tall, dark and brooding look.” Folding his arms Taylor swayed back and forth on his feet, the grin never leaving his face. “I think you need to get laid. What’s it been, close to a year, stud muffin?”

“Take it on the road.” Sadly, Taylor’s observations about his less than stellar love life were dead on the money. Ever since David had whisked out the door like a raging bull in a china shop claiming they’d never gotten along, Montana had escaped into his work. After all it wasn’t every day a man in his twenties achieved the rank of Vice President of a national advertising firm with worldwide clients. Now he was bucking for an increase in salary as well as perks – company Mercedes, black American Express. Yeah, he’d be ‘the man’ then, admired by all who knew him. Working long hours had garnered him everything his heart desires. Right. Tell another lie white boy.

Taylor raised his eyebrow. “All right this crap has to end.”

What’s on your menu for lunch today? A wicked tryst perhaps?

Birthday boy Montana Devereau should have been celebrating turning thirty. Instead, he was buried behind a mountain of work and planned on skipping lunch in order to get home early. Unfortunately, there was no one waiting for his arrival. When fellow employee and all around bad boy, Brad Swimmer, asked Montana to lunch with the guys, he was intrigued. After all, he’d had a crush on the golden haired God for years but the rough-hewn hunk had never given him the time of day. Saying yes, Montana settled his thoughts on a simple burger and a beer. Too bad the guys had kinkier thoughts in mind. When they took him to an unassuming brownstone smack in the middle of town, Montana knew something was up. With a name like Burgers & Bondage, their lunch suddenly became more of an adventure. In truth, submitting to a man was Montana’s darkest fantasy. Was this a dirty little lunch in the making?

Natasha Spencer hungered for her boss, RT Brace, but the hunk of a man didn’t know she existed. Then again few at his advertising firm knew anything about the mysterious and very wealthy man. During one luncheon adventure with a friend she 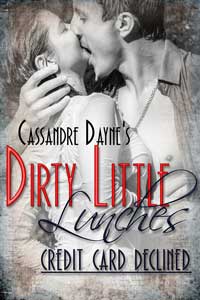 was coerced into picking out a few naughty pieces at Victoria’s Secret meant for seduction. A brazen hussy she wasn’t, but the sultry lingerie was just what she needed to fuel her fantasies. After their adventure they enjoyed a late lunch and prepared to return to work. When Natasha pulled out her credit card to pay the bill she was shocked – it was not only declined but also reported stolen. To her horror the restaurant manager called the police. As she was led away in handcuffs and directly to a waiting limousine she realized she’d been duped. When the man of her dreams opened the door, offering a tasty way of paying off her debt, she knew she couldn’t refuse. Eyeing the chocolate-laced manager as a third, Natasha knew a dirty little lunch was in the making.

Mmm – what do you think? Hungry yet? Oh and both of these of course have sexy bouts of raw and hard spanking to them.