I heard the whispered words, his evil yet encouraging laugh, and right now I was still trying to remember my name. What the hell is wrong with you?

Go for it. You can do it. I have faith. His laughter trailed off.I had to be going nuts. 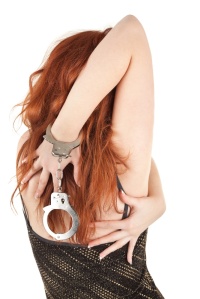 Who the hell was this jerk? “You’re pathetic.” A horn blasting from behind my car made me furious. I stuck my finger out the window, laughing when the asshole revved around me, his tires screeching on the pavement. I needed to get a grip. The six words had remained in my head since I left my place. I was hot and hungry. “Mmm…”

My head was pounding, forcing a wave of raw nausea to linger in my bowels. I had no fucking clue how many times I had to pull over, retch on the side of the road. I wiped bile from my mouth as I turned onto a well-lit street wondering if anyone was paying any attention to me. Ah who the hell cares? Sniffing, I glared out the window, marveling at the shape and color of the moon. Easing back in the seat I yanked out a cigarette. Yeah, there wasn’t any doubt I needed to quit the nasty habit. Then again the nicotine high was almost as good as downing a pint of bourbon. As I lit the special blend Marlboro, taking a long drag, I closed my eyes, leaning my head against the headrest. For some reason I was shaking all over, yet the tingling wasn’t something I’d experienced before. I was alive, freaking alive.

I heard the snort leave my mouth as I envisioned a sultry blond, her breasts jiggling. No, a redhead. Yes, I was craving the sweet pussy of a redheaded vixen, one whose pussy hairs matched her copper colored strands. How long had it been since I’d tasted a woman, had her hot mouth wrapped around my cock? Long enough the tramp selected tonight was gonna take every inch of my dick, sucking out every drop of cum. Damn, the vision of the slut on her knees, devouring my cock was hot as shit. My dick was hard as a rock. The second I rubbed my groin enjoying stroking my balls I could hear his howls.

A shiver trickled down my spine, one indicating how famished I was. Pussy was definitely in order tonight. I finished the cigarette and the moment I tossed the butt out the window and opened my eyes I smiled. I hadn’t noticed the flashing neon sign. “Club Ecstasy huh?” Yeah, the place sounded perfect. This was a shit part of town, the kind of area I’d arrested more than a few prostitutes, sending them on their merry little way for a night in the tank. Yeah, leering at them had been a perk. Now I was ready for more. Much more.

Easing out of the car I locked my gun in the trunk along with my credentials. Tonight I was just a man, hungering for the company of a two-bit whore. The moment I entered the seedy joint I felt right at home. What I found funny was the fact I wouldn’t have frequented such a shit hole even three months before. Now I was right at home. I scanned perimeter, my cop’s eyes honing in on just about a half dozen dirty deals. I didn’t give a shit. Tonight was about serving my needs, my desires, not about razzing a bunch of hookers or thieves. When my eyes adjusted to the dim lighting I headed straight for the bar. Yeah, I needed a fucking drink.

“Whatdya have, cop?” The bartender asked as he grinned.

I actually realized I was debating punching him hard. Instead I grinned. “Off duty. Not interested in bullshit, just a cold Budweiser and a shot of tequila.”

“Understood and you got it.” 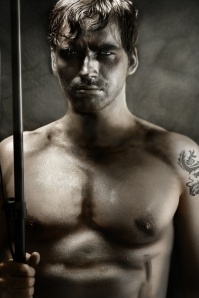 As the bartender moved off I glared down at my clothing. Yeah, the black jeans and crisp white shirt were a dead give away. Tomorrow I was going to secure some new duds.

Her voice was sultry, the tone laced with nothing but seduction on her mind. I turned my head slowly. No need to act like I gave a shit. I’m honestly not certain if I was surprised she was perhaps the most perfect redheaded chick I’d laid my eyes on. There was some karma bullshit floating around, as if he was planning a sweet surprise for me. I studied her briefly, taking in the fact she was a bit older, perhaps in the light rode hard and put away wet, but her dazzling green eyes were mesmerizing. “Yeah. What’s it to ya?” I could heard her clipped sigh, knew she was looking toward the bartender. She’d obviously picked up on the fact I was a cop, knew I was safe. Uh-huh.

“Geez. Just trying to make conversation.” She turned away, rolling her eyes. As if I couldn’t see her expression.

The jerk of her arm was instant, firm and very forceful. When she gasped the bartender snarled. I narrowed my eyes, reminding him I did indeed have the authority to lock down his ass. He backed away, holding up his hands before tending to the drinks. I tipped my head, studying her hint of fear, one followed by the sheer delight of a man taking charge. There was something about this woman, an intensity of raw need I craved. I towered over her, even though she was at least five foot ten or so in heels. All I could think about was eating her sweet pussy. “Name?”

“Well Savannah. Here’s the deal. You and I are going to have a good time. Do you hear me? Do you understand?” Savannah hesitated for maybe ten seconds until I dug my fingers into her arm. “Do you?”

Her laugh was nervous yet there was no doubt she was turned on. Her cunt had the most incredible scent. “Let’s have a drink.” I only had to look at the bartender. He nodded as he grabbed a second shot glass. “Then we’ll play. Understood?”

“Trevor, but you can call me Sir.”

I just bet you do, slut.

The drinks came and they were consumed, others ordered. I smoked a solid half pack and normally I would chastise myself. Tonight was a new beginning, one that meant something. Tonight I was going to finally break free from the freaking bullshit I was entrenched in, become the man I knew I had to be. Now I sounded like a fucking Hallmark commercial. I polished off the shot of tequila and turned to face her. “Tell me. Do you like to have your pussy licked?”

Savannah was taken aback for just a few seconds. A wry grin popped on her face. She nodded, batted her eyelashes and brushed her fingers down the length of my arm, moving to my crotch. “Very much so…Sir.”

“Good.” I opened my legs, allowing her to squeeze my aching cock and balls. “Then be prepared.” I savored the moment, the purposeful touch of her hand and all I could think about was shoving my cock into her ass, wrap my hand around her long neck. The moment she giggled I grabbed her hand, pulling her out of the club and 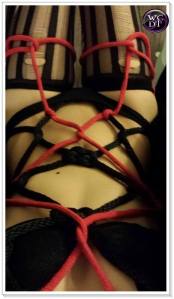 into the darkness. I was yanking hard enough she stumbled at least twice.

For some reason her defiance pissed me off. I wasn’t ready to take no for an answer, not that the little slut would. She was mine, prepared to serve me, and the thought was sweet indeed. I remained silent until I reached my car. In a flat two seconds I shoved her on top of the hood, ripping off her panties as I pushed her down.

“Ooohhh!!!” Her squeal was lost in the humid air.

“You will obey me. Get it?” I wrapped one hand around her throat and used the other so force her legs open.

“Yes sir.” Her strangled sound was also filled with lust and she opened and pulled her legs back, exposing her slick cunt to all of God and man.

“Good girl.” Tonight I was going to feast. Lowering my head I gathered her ass cheeks into my hands, my fingers digging into her soft flesh. The scent of her was intoxicating, almost perfect. Even in the shadowed light, the one giving me peace of mind I could tell. Savannah was a natural redhead. The moment I shoved my face into her pussy she moaned in pleasure.

Here’s a link to Christian’s rather evil blog