Spanking at a Family Reunion? WHEW!!

Posted on December 6, 2014 by Cassandre Dayne

Can you imagine? What if your husband or Dom pulled you over his knee, yanked up your dress and pulled down your panties. Then what if he proceeded to give you one hell of a spanking? What do you think your in-laws would do? Hmmm… Yes, no matter the personal crap going on in my life, I’ll forever believe spankings are good for the body and soul. I had to finish this feisty little story, one meant only to scintillate your senses. Getting this one polished off today and it’ll be available for a tiny little $.99. Here’s a taste of what I call Christmas Magic.

“You did what?” Ashley Madison snarked as she glanced at her husband of ten years. Even with his adorable dimples and sexy beard, she was still pissed at him. Pissed? She’d been fuming for a solid two hours. Heath always did shit like this without telling her. His impetuous decisions made her cringe, burn inside. He

didn’t seem to care about her thoughts or needs. Damn it. Damn it!

“What’s the problem? We’re only talking three days,” Heath huffed as he grabbed a beer from the refrigerator. “My family hasn’t been all together in almost ten years. You know that.”

She glared at him, her thoughts murderous. How many years had she put up with his bullshit? “Yeah, and you’ve been telling me for years how much you hate your family, loathed going back to what you call that ‘ho-duck town’ and you ask me what’s the problem?”

“Yep. That’s what I asked and for the record, they are my family. I might not agree with everything they say, but this is all about Christmas. You know the spirit of giving? The most wonderful time of the year?”

“Right. I see. The problem is that you just assume I’ll go along with everything you want. Everything.” Most wonderful time of the year my ass. “I’m sick and tired of you never asking my opinion or giving a shit for that matter if I want to do something.” The glassy eyed look of nonchalance riled her even more. Visions of raking her nails down the side of his face remained in the forefront of her mind. When he popped the bottle top and slid the thin metal on top of the counter, she’d had enough.

“I don’t understand the issue. You’ve been telling me for years I should reconnect,” he mumbled under his breath.

“You’re an asshole. You know that?”

“You know exactly. You’re a pig. You just don’t get it and what drives me crazy is that you never will.”

He remained stoic, a blank look on his face.

“Another ‘whatever’, just like the rest of our relationship. Whatever that means. You have zero clue what anything means to me and in truth, I don’t think you ever did.” She couldn’t help but spew. Her hands were shaking so badly she almost dropped her glass of wine on the floor. She swore under her breath as she walked out of the kitchen, determined to push his antics in the back of her mind. Too bad she was on edge, ready to chew through a bag of nails. She hated his family, the backstabbing and holier than though attitudes almost as much as he did. So why a glorious visit this Christmas? Huffing, she took another sip of her wine, wishing she’d brought the bottle with her. She flipped on the family room light and hissed.

The sight of the undecorated Christmas tree was another reason to fuel her anger. How many times has she asked, begged, and cajoled him into helping her decorate the tree? She checked her watch for confirmation. “December eighteenth.” Now with leaving the day after tomorrow to see his family, which would put them back on the night of the twenty-third, the tree would remain ugly. So much for a happy little holiday.

A single gulp of merlot turned into several. Even the twinkling lights of her all of her neighbor’s exterior decorations couldn’t soothe the savage beast. Christmas fucking sucked. “I hate you. I really hate you.” Closing her eyes, she stood remembering their first few holidays together, when they both seemed so happy. Seemed. Yeah, she was no longer certain if they’d ever been happy. Everything between them had been strained. He refused to take a stand on anything. In the quietness of the house she could swear she heard Christmas music playing. Pipe dream. Not in their house. She leaned her head against the window. Why was she married? Why did she allow herself to trust again at all? Loneliness. That had to be the answer.

“Tell me what would make you happy.”

Hearing the masculine husk of his voice continued to thrill her, no matter how angry she could get with him. Heath was a hot looking guy, even for being in his

early fifties. They’d fallen in love almost instantly. Days and nights of passion had been incredible. What the hell had happened to them? She found herself struggling with the answer. “Happy?”

“Yes. What brings you any joy? Any? I haven’t seen you light up with excitement for months. I don’t think I know you any longer.”

“Okay, I’ll play this game. Describe happy for me in your terms.” Of course he hadn’t seen her light up. How could she when he was dower and had almost zero personality? When he didn’t say anything for a few minutes she turned to look him. “Your terms, not mine.”

“I want you to tell me what you want. For once I just want to her what makes you happy. Nothing seems to bring you out of your darkness. Nothing gives you passion any longer. I just don’t understand. You’re surly and seem to hate life. You work all the time and you can’t focus on anything but your career.” Did he just hate life with her? That was the million dollar question.

Another full minute ticked by and she sucked in her breath. Patience wasn’t her virtue. “Whatever.”

“Not whatever. Why do you have to fight me about everything?” Heath asked quietly as he moved closer. “Why is everything we talk about or try and do together seem a complete challenge? Why?”

“That would be because we don’t get along. We don’t listen to each other. We have nothing in common and after merely ten years we barely talk. There’s no intimacy in our relationship, no sense of burning hunger like there used to be. I need the passion. I need to be first in our relationship. I need to know you love me and you simply seemed to have checked out. I have no idea why. None.”

He seemed to be studying her. “Checked out. Wow.” His eyes flicked back and forth across her face, his pensive. “Maybe because you stopped being you a long time ago.”

“You know exactly what I’m talking about.”

“No, I don’t,” Ashley snapped yet flashes of her former self, the kinky and raucous things they did together, filtered into the back of her mind. They had changed over the years. Everything was tense, as if they had no idea what to say to each other.

“Yes you do. You used to be a wild child, full of happiness and verve. You used to find excitement in joy in everything we talked about. You used to greet me at the door telling me about your day with some level of… I don’t know, happiness. Now?” Heath huffed.

He shook his head. “This is a perfect example of what I’m talking about.”

“Come on, Ashley. You’re mouthy, incorrigible, arrogant and in truth…”

The words hung in the air. Narrowing her eyes she gave him a harsh look. “And in truth? Finish your statement.”

“All right. You need a hard spanking, hell maybe more than one. In fact, I think you need to be spanked on a regular basis. That’s exactly what I think. You need a man in complete control of you, an authority figure.”

Ashley Madison was a card-carrying bitch and she wore the badge proudly. Dear God if she didn’t long for a controlling man, one who refused to take her daily aggressive barrage. Sadly, her husband of ten years didn’t have a dominating 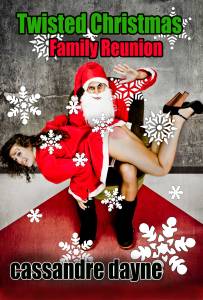 bone in his body, so her behavior kicked into high gear. When he planned a trip to see his entire family, one he supposedly hated, over the holidays without her knowledge, she exploded. This shit she refused to take.

Heath was through with his wife’s temper tantrums. He loved her dearly but something had to give or they were on the path straight to divorce court. After a ridiculous argument, he took matters into his own hands, giving her one hard spanking. While they were both shocked, he knew this was the right way to try and save their marriage. Still, he had to find another way to reignite their once wild passion. When a thought entered his mind, one he’d pushed aside for years, he was driven back to his dark past. But this could be the single way…

Could a family reunion complete with a nefarious plan, a strict officer of the law and a wicked and seductive Santa bring about the magic Ashley and Heath desperately needed? Then there were those much-needed spankings…

I hope you enjoyed a naughty little taste and I do wish you and your family a wonderful holiday season!

Kisses and very hard spankings under the Christmas tree…

It’s the most wonderful time of the year!