Rules and Tethering Within a D/s Relationship

I’ve blogged about rules before, but as I’ve written many blogs, stories and books etc. about melding a D/s relationship in with everyday life, I’ve been able to embrace the concept in a different manner. Plus, actually sharing a D/s journey with an amazing man, one where we can’t be together all the time, the dynamics are certainly changing as the tides flow. Being reflective these past months have changed me as well. The woman I am today is vastly different than the one just a year ago. Letting my guard down about my needs within D/s has opened my eyes, soul and 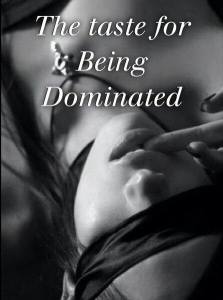 heart. Granted, I still have worries and trepidations and only time is going to heal my basic concerns. What I do know is that I’m a much more well-rounded woman having embraced this side of me. Then again, I had to fact difficult facts about myself. I need certain parameters in my life or I’ll go off like a wounded tiger, lashing out. That’s where rules and guidance come in.

Tethering is something else entirely. It’s the ability to stay connected no matter the distance or various aspects of a vanilla life, ones that might interfere with the ability to share a 24/7 D/s relationship. This can mean phone calls and texts, emails and Facetime to meetings and of course basic time spent together. For the majority of us who work, we take this contact for granted, sometimes preferring never to hear from our significant other. This can be a time of peace away from the home. For D/s couples, being tethered is important. For a Dom, this is a simple and effective manner in which to maintain control. For the submissive, she longs to hear from her Dom, a moment of affirmation that allows her to feel loved, wanted.

I read a fascinating article yesterday that hit home for me personally. The piece discussed a professional woman in a long distance D/s relationship and her challenge regarding this very subject. Her daily tensions and stresses in life kept her on edge and her main concern about entering into the lifestyle was whether she could or would follow even the simplest rule. Interesting and rather disconcerting concept. I didn’t stop and think that rules imposed on someone like me – willful, assertive/aggressive, in charge – might be vastly different than rules imposed on someone who’s been in the lifestyle for a long time.

Why would they be different? I really didn’t put enough thought into realizing my overall personality is a direct conflict to being a submissive. That might sound silly, but I think I assumed I could float back and forth in the two roles easily. Perhaps the concept would be easier if I were living with Sir or was able to spend more quality time of any length. He and I talked early on about the aspect of rules, but we’ve really never put anything concrete into place. I say we because this is where the thought process of a contract comes into play, but for me, this is all about serving his needs.

There are few opportunities to utilize any suggestions we’ve come up with. Of course we have a few, but they come and go depending on what’s going on around us. For both of us, we finally realized the connection, his control and my submission are even more vital given we aren’t together as we desire. How can he help guide and train me to his needs without at least a few rules that cannot be broken? He’s been thinking as of late and some are very personal in nature, while others are more generalized. I can tell you his imagination is very creative!

He’s a wonderful man, realizing every day my vanilla life interferes, so I’ve been able to ‘get away’ in a sense with not following through with a request – such as certain pictures he wants me to take. While there have been legitimate reasons for my disobedience, I’m not very good on follow through at another time. I don’t think consciously I’m trying to disobey, but subconsciously? That’s something I’ve reflected on recently. There’s one very viable reason I might be – I need his firm hand. This isn’t unlike a child misbehaving for attention. I need the closeness a round of discipline brings to us. Of course there is love and passion around the moment, no matter that he is punishing me for a wrong doing. I’m craving everything about him so I feel myself pushing. Thank God the man is patient!

In reading the article yesterday, the blogger talked about her particular angst with moving from her professional take charge demeanor to her submissive stance. Truly, it’s tougher than you might think. You’ve heard before that I have a silver chain I wear as a bridge between the two worlds, but even that’s not enough. The article mentioned several very creative methods the couple was using to try and bridge the gap between her vanilla and submissive realm. They started with a few simple rules, including one we use – texting any time she left her job, home etc. He wanted to know where she was at all times.

After a couple of months, her comfort level increased and they moved onto other rules. The new set of guidelines fascinated me. He had full control over her appearance from the clothes, to jewelry and underwear, including requiring one day she go commando and one day each week she wear a red bra and panties. She had basic requirements about not using her sex toys or pleasuring herself without asking. Of all of this what I thought was something that would be very feasible for Sir and I is an email each night describing what I was wearing and a thought at the end telling him any joy, concern, curiosity etc that was on my mind. For this submissive, she also had several ‘day’ collars and of course he selected the one she would wear for the day.

I read the article twice and realized, the piece really missing for Sir and I are a concrete set of rules. We can talk about obeying him and I do receive commands every once in a while, but there’s no list I must follow, no basic protocols I need to keep in mind. This is very disjointing for both of 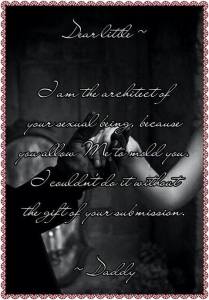 us. I mentioned this to him and he agreed. For us, the deep connection of being physical is very important of course, but given how our relationship began, this is another method to stay close, tethered.

I think that’s what so many people in vanilla relationships don’t realize is that both the Dominant and submissive need to feel the very close joining they share. The intensity of this kind of relationship extends the normal boundaries of being together. There’s a missing piece when the Dom and sub aren’t in contact on a regular basis. I know for myself, I honestly do feel lost at times. I go about work, writing, etc of course just like I used to, but there are times I will stop and think, wonder, need a moment or two to re-connect. The realization after a few months was actually startling. Me for, embracing this concept grew my trust and respect of him to a higher plane.

Developing a set of rules is very personal and will be somewhat different for each couple. You have to know each other completely, have gotten over your fears enough so you can be as open as you’ve ever been. Only then will this work. Remember this is a journey, a wonderful, intense and very raw journey together.

8 Responses to Rules and Tethering Within a D/s Relationship