these before, but in more roundabout ways. These were interestingly focused and presented his thoughts, which I’ll mention in a bit, about some of the comments.

Let’s look at the questions and if you’ve even remotely curious about the lifestyle, think in your head how you’d answer them.

What part of the lifestyle makes you think ‘this is why I’m poly’?

What part of the lifestyle makes you think ‘wow, I never expected that’?

They seem like such simple questions from the get go. If you’re like me, you reflect on the meaning and suddenly you’re delving into more about you, your needs and wants, why or even if you can tolerate the thought of poly. I read the responses in which both Doms and submissives were represented. Polyamory certainly isn’t a one sided relationship. If both the Dom and sub aren’t truly into the entire concept, then this wouldn’t work.

I mentioned this to JP and of course we both realized, polyamory isn’t exclusively with regard to D/s partners or does it have anything to do with BDSM necessarily. Poly households can mean equality all the way around and come in various forms – m/m/f/f, m/f/m, m/m/m – endless numbers and concepts. The answers to the first question were very heartfelt. For the majority of those who answered, and in the Fetlife answers we are talking D/s relationships, the majority said they knew they could love another. They enjoy sharing their love with another, describing their relationships as without jealousy and being much more fulfilled. Of course JP and I have discussed this. I do think you know in your heart and soul whether you’re the kind of person who simply wants one – the love of your life. For those of us who believe in polyamory, of course this isn’t the case. Relationships are built on so many incredible aspects including every day, romance, sex, discussions, openness… You get the picture. I understand where they are coming from. 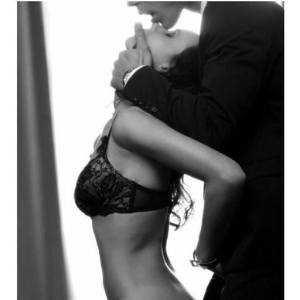 Other comments were based on the ability to share every day life – the joys and tears, good news and bad. I sat back and reflected. Would I enjoy having another person other than my significant other to lean on, cry with or celebrate with a glass of champagne? I guess you might call this third person a good friend. I have an amazing female friend who’s been in my life for over two decades. We share everything together. She knows my foibles as I know hers. I can tell her when I think she’s a dumbass and vice versa. She is also the one JP would love to have in our life in a more permanent fashion. Yes, he’s attracted to her as well. Would the complex relationship work? Maybe, except she’s the marriage, white picket fence and golden retriever kind of girl, even though she’s had a series of wretched relationships in her life.

The second question – wow I never expected that – many said the people they’d talked to who attempt to try a polyamory lifestyle. Perhaps the thought is better than the reality in certain cases. If you think about it, having a couple people to snuggle with, share things with is amazing. What if a whole lot of jealousy and anger comes into play, something you never expected to happen? If you’re very tight as a threesome or group, jealousy will completely derail what you share together. If there’s a married couple involved, who do you think will be on the short end? One lovely comment was from a woman, who enjoyed nothing more than to share time on the couch, snuggling and talking with her two men. Sounds lovely.

After JP read the forum, he told me that there was no way he could handle a m/m/f type of relationship. Of course I already knew that. He’s certainly not into men sexually at all and while he wouldn’t have to partake this way, sharing me with another male is off the table. We talked about the fact some polys are very equal and he agreed, but I know him very well.

As I told him, the kind of relationship he would thrive on is being in control. He agreed stating when everyone knew their place, the relationship could certainly avoid various arguments. Whether or not this is entirely true could only be judged after living the lifestyle. JP likes organization, exacting at times. He wants to lessen the drama, create a peaceful home, something he doesn’t have. He also sees an order to things such as having two submissives. I’ve told you before, I will always be his first, the woman he fell in love with. But does that mean he can’t fall in love with another? The short answer is no. He has a tremendous amount of love in him and enjoys showing, sharing his entire being, much like I do. Yes, it would take a special woman to know I was his first. What that means is something neither he nor I have any idea about. There simply isn’t a method to do so unless we live the lifestyle.

We both found the questions and answers fascinating. A few worried that levels of jealousy were creeping in and they’d have to make a choice. That’s certain a true concern. What if everything is almost perfect for a period of time? Then on day everything is laced with tension. Tough to even contemplate. Much like marriages, when you aren’t happy

and have spent years together, how do you break the connection. With D/s you become so close, so intimate in ways that has zero to do with sex. The very concept is daunting as hell.

As far as my answers – I’m not the white picket fence girl. I can love others. I’ve always understood I’m a bit out of the norm as far as women. I long to honor and obey one man – BUT… I have other sides. What surprises me? That’s tough to answer. Perhaps that so many in society looks upon the concept as akin to being close to Satan. Will we try this? Only time will tell but we’re keeping an open mind.

1 Response to Continued Discussions About Polyamory