Happy Spanking Anniversary and a Goodbye

Posted on September 7, 2015 by Cassandre Dayne

Catchy little title. Eh? Well, this is a cathartic post. What you’re about to read, if you do, might surprise many of you, but it’s a celebration as well as an ending.

Four years ago I had an email from an FB friend of mine suggesting I send a book to Rebel Ink Press. I put the finishing touches on Treats in a Plain Brown Wrapper, sent it off and on the very next day I had an acceptance. (This is my first cover ever) That began a wild ride into the world of publishing. There have been many twists and turns since then, but with over 200 books/stories published and in several genres, I’m still writing – albeit times have 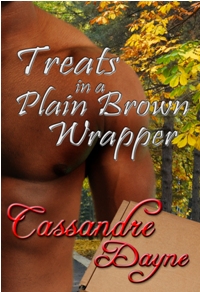 changed. Oddly enough, I no longer have the strong drive I once did. Perhaps I’m just tired or slightly disillusioned. However, writing is a craft I began when I was five. Yep, five years old. I was writing little stories then that grew into novels when I was 13. I still have some of the original novels I penned on an actual typewriter. I know, dating myself.

Anniversaries are an interesting flash back into your life. I had another one yesterday in catering an event for a community that I still manage. DH actually does the work since I have a full time position with another community. The 27 unit condominium used to have several parties a year, ones in which DH and I catered often, spending our own money and serving. I also once owned a full-fledged catering and entertainment firm, hosting parties for various apartment community socials and private functions for years. I’ve seen the best and worst in people. Mothers of brides still make me shiver. UGH. There were many good times, but in truth, the work was tougher than you can imagine.

In catering this barbecue, I was taken back in time. Either I or DH have managed this particular community for over 20 years. That’s HUGE in the world of association management. As you can imagine, I’ve seen many age and have attended several funerals. I’ve seen others go into assisted living. Many of the original people I’ve known are still there and I hadn’t attended an event or interacted with them in years. I’d burned out in association management, was able to write full time for a little over a year and when the money got tight, was forced to return to a career I’d begun to loathe. Coming back to doing what I’ve been trained to do and accepting a full time job in another city was difficult and time consuming, but I had to contribute to the household income. Writing wasn’t doing so. Recently, I was offered a high powered position managing a single large-scale community. Thank God I’m now only 20 minutes away from work. Recently, DH and I decided to give back to this little community as a thank you.

The parties over the years had come to be expected and suddenly we were no longer teammates but ‘hired help’. For any of you who know my personality, I don’t take entitlement well at all. I’ve also heard stories about some people who moved into this small community and in truth was ready to rip their heads off for the way they treated DH. One in particular is what I’ll call a televangelist. He’s an actual minister who has a radio

show devoted to Christianity. Don’t get me wrong, to each their own, but the way in which he treated DH – well, certainly not Godly.

As many of you have read, when I accepted a position at what I consider an amazing community, I was suddenly in the headlines of the local paper. I was labeled everything from a porn star to a killer of women. In stories of course. While I can certainly turn the other cheek so to speak, the concept was rather disgusting and took a toll on me emotionally. So I was warned when I went to this event yesterday to be a good girl. Meaning, ‘keep your mouth shut’. I did have various people, namely men, who commented on my writing. I even had a few say they want to talk to me about my writing and would like to read stories. Even from the community I manage, the talk of the town has turned more into asking me questions about the business of writing. Interesting and I’m glad folks have begun to see I don’t carry a whip on my hip or hide in a dungeon after work.

As authors, we pen stories that burn within us and that we hope readers will enjoy. When I talked with the televangelist, I could tell he was judging by the rather snarky comments he made. He loves the limelight, took every opportunity to expound himself in various ways, and tried to manipulate conversations. I observed, smiled, was indeed a good girl and at the end of the night left with a good feeling – but not because of his behavior. Yes, we were thanked for the time and money spent, but the reminders as this anniversary of sorts hit, has pushed me into reflective thinking. I’m very happy being an author and a Managing Director with Booktrope, but the girl Cassandre Dayne has been is no longer there. The world of erotic writing no longer fascinates me. Let’s face it, there’s only so many ways you can have a wicked tryst or engage in carnal activities. I’ve written about them all with both sexes, same sex, ménage, etc. I’m bored.

While certain aspects of the genre continue to intrigue me, both personally and given the writer I am, I’m no longer certain readers are interested. So a change in my mindset has been made. I have a few stories I’m finishing up, dozens more being re-published by Booktrope, but after that, Cass as you know her is done.

I woke up the other morning and my dreams had been about spanking. I chuckled when I got out of bed wondering whether I seriously needed one or was simply planning another book. So many readers of my blog like it best when I write anything to do with spanking. I firmly stand behind the concept within relationships, but again, how many ways can one be spanked before you’ve read it all? I have dozens of stories that are full of angst, realistically depicting stories about troubled couples and spanking in the way of domestic discipline is the answer for them. Sadly, I hear more about the act and art of spanking – what implements and positions are used, than the story itself. I’ve even had a reviewer comment on my first DD book that it was wonderfully written but not a spanking story.

What do readers want to read at this point? I’m honestly not entirely certain. I used to say that a well crafted story the majority of readers wanted no matter the storyline. I have no

What I do find are people who have dark pasts, lives that are difficult to tolerate and various injustices. They need escapism. Well, reality shows seem to have been the ticket the last few years. How sad. I have 200 plus channels on cable television and what’s most often found? Reality shows. It’s a dark day on our worlds in my opinion. So, the writing career. I’ve been thinking hard and enjoy writing about the ugly and almost evil side of humans. We all have a dark side. We can all cross the line given the right situation. So there you have it. Whether I’m writing about the human monster or one very fictionalized, that’s where I’m headed. There will still be erotic elements, but I’m weary of flippant stories wrapped around sex. You’re going to see more DH Black come into the picture as well. ‘His’ writing fascinates me and allows the inner demons to come out on paper. We’ll see how it all goes.

I’m thankful to the various publishers who’ve I’ve worked with, including one who recently closed their doors. Secret Cravings was well run and had amazing people working with them. Rebel Ink Press gave me my first chance, followed by Naughty Nights Press (who I’m still with and will be). However, the world of publishing has changed and will continue to do so. That wild ride I mentioned. I’m thrilled to have various opportunities with Booktrope and you’re going to see some exciting things happening, they just won’t be with Cassandre Dayne as you’ve known her. Such is the way of things.

The blogs will continue to have various avenues of D/s and DD. I enjoy teaching those what I’ve learned, but there will be other entries as well. I hope you’ll come with me as I move into another realm. All things have to change.

6 Responses to Happy Spanking Anniversary and a Goodbye