Posted on October 3, 2015 by Cassandre Dayne

Whores. The word leaves me with so many thoughts and ideas. Now what if she’s a carniwhore? An interesting concept. Don’t you think? I’m continuing highlighting my fellow authors of The Animal – a terrifying look at the darkness nestled within all of us. This collection is one best to be read in the light. But if you dare read after dark, well… What would it take for you to cross that thin line, maiming or killing another? The heat of battle? A moment of pent up emotion? Mmm…

Alex Johnson is truly gifted in the art of expressing vile aspects carried out by unassuming mean and women. I’m happy to present his piece. Just be careful where your mind might take you after you read.

The beast rises within her, testing points of entry.

She wills it down.

This is not her, will never be her: The leering, blood-foamed mouth. Eyes like cinders. And 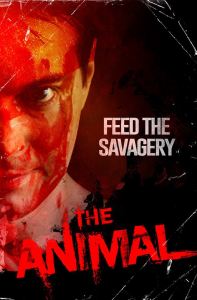 Words they used: Daddy, husband, brother. As though names could shrink her to nothing but parts on display.

Branded, boxed, caged, bound. Turned out to Daddy’s buddies, husband’s asshole friends. She was made to do what went against every last nerve in her and she rebelled at the ugly thought.

Sucking. Swallowing. And the taste that went with it. Sour, rank, greasy.

Susan winced at her face in the mirror. Then she took down her hair, releasing the glossy red curls. This was slightly better.

She applied foundation and a smidgen of rouge, then eye shadow.

She would never let the violation turn her into some kind of living dead girl. Even if it surfaced and batted at her brain, swarmed her sleep with nightmares. Never, ever, ever.

She couldn’t remember exactly when the beast showed up with a plan. Just the plan itself, and her revulsion at its crude simulation of justice.

And that it wanted to be fed.

The plan itself, that is. The beast had gone into hiding, had been absent for weeks now, to the point Susan remembered it only as a dull pulse in a vein in her forehead, but more frequently as an absence between her thighs.

A wanting. A craving.

She opened the medicine cabinet, tore down bottles that clattered to the counter. She swore at the tiny supply of painkillers, a few half-powdered tablets silting the green plastic containers. She picked one up and held it to the light. The single bulb overhead flickered, and a soft wave of radiance, a ghost of incandescence, seemed to pour out from it.

It wasn’t possible that her father, brother or even her husband had gotten free, much less fucked with the fuse box. More likely, the asshole landlord, Kuza, had sent unlicensed fakes to pretend they had the competence to fix the wiring. If she complained, he’d shrug his shoulders and ask her about the past due rent.

The beast had plans for him, too. The landlord who was just like Daddy, just like her husband, smarmy faces and rotting hearts. After barely obtaining his realtor’s license, Kuza was hot to have the buildings in her run-down South San Sebastian neighborhood torn down and collect the bribes from interested parties who wanted to run an extension of the 112 freeway through.

Tenant’s rights? Fuck that. For Kuza, the people who occupied his apartments were no better than vermin. Animals.

Susan descended the stairs. Of course, the lights from the incandescent array in the cellar held firm. Earl Kuza was smart enough to make a little show for the building inspectors, in case they popped in for an unannounced visit. As for the tenant in Number 23, she was a nuisance, and papers were being drawn up. 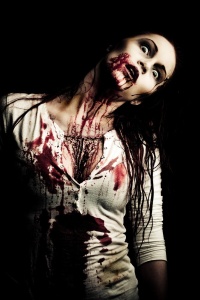 A faint moaning issued from behind the cellar door. Susan smiled as a rush of adrenaline spiked her bloodstream. The painkillers were wearing off, and an epic reign of hurt had announced its dominion among the victims.

She turned the knob and looked in. Ms. Torment—she’d forgotten her real name for the woman’s current state, it was far more interesting that way—strained at her manacles and squealed pitiably from behind her own soaked panties and several feet of duct tape.

Besides Torment, there were those Susan had added to the collection. Nosy, vile neighbors, plus the little shit who’d harassed her about the newspaper subscription, elbowing his way into her studio and making fun of the change jar and the posters on the walls—Zombie Doom, Hellraiser, Henry: Portrait of a Serial Killer.

Gripping a handful of Torment’s greasy hair, Susan ripped the gag out and threw the wadded filling to the floor. Torment sputtered and tried to work her tongue.

The stump wriggled from its base. Susan smacked the side of the bitch’s wrinkled face. “Un-unh, that’s enough out of you.” The tongue in question would make a nice dinner, accompanied with butter sauce and a tart garnish of parsley. And a glass of sweet red wine, of course.

The others were waking up. She’d thought about collecting their tongues too, but preferred other portions—shank, fingers, cocks and balls.

“Just checking on the food supply,” she said.

More annoying but well-muffled complaints from the food.

Satisfied, she shut the door and ascended the rotting wooden stairs. When she returned to her apartment, a fresh three day vacate notice was taped to the door. She tore it off, crumpled it and tossed it in the bin of gag material.

First she thought it was a prank call, because all she heard at first was rough breathing.

Silence. Then, “Is this Susan Mignon?”

“I’m just calling to follow up on the notice that was posted today on your door at 0800 hours.”

“You’ve got to be kidding me—military time?”

“I assure you, Ms. Mignon, I am not being humorous in the slightest. If you don’t clear out within three days, you’ll find the marshal is even less of a comedian than I am.”

Typical Kuza—bluster, threats, the stilted, formal diction of the undereducated.

“Oh really. Have you checked the civil code? Your notices aren’t worth shit. You need to serve me with a letter of illegal detainer. And buy me breakfast. And double check the wiring in my space. A girl could injure herself badly, you know?”

“I have full confidence in my contractors, honey.”

“Oh, I’m honey now?” Susan’s voice took on a warmer tone. “Well, honey, maybe we can work something out. You got some time to discuss my situation over, say, a nice bottle of red?”

“I said we might be able to reach a solution. You’ll still be liable for the damages to the property you caused and of course the fines, et cetera, and the marshal will arrive posthaste within 72 hours, respectfully, in good faith.”

Susan smirked at his arbitrary use of googled legal terms. “Sure, of course, I understand. In good faith, that is. So, say, 9:00 pm?”

Susan went to her wardrobe and selected a silver nightgown of wet silk with a slit up the side, white thigh-high stockings and fuck me pumps with six-inch heels. They were almost impossible to walk on, but she didn’t figure that as a problem. One look at her and Kuza was bound to tumble her to the mattress, breathing heavily, his cock already out and slapping at his thigh.

He looked adorable sliding out of the black Mercedes in full formal evening wear. Susan suppressed a giggle. Did the shithead actually think they were going to a restaurant, that the maître d’ would direct them to a table, knowing glances exchanged over haute cuisine? Was he that stupid?

“Oh,” said Kuza when he saw her standing in the doorway. His face went beet red. “I—was under the impression that we would be dining out.”

“C’mere, you.” Susan grabbed the neatly-knotted, vomit green tie and dragged him inside. She pushed him down to the mattress and straddled him.

And the beast began to roar again.

All I can say is delectable.

Kisses and thoughts of evil doings…

Cassandre Dayne is the pseudo for the best selling author of romantic suspense and thrillers
View all posts by Cassandre Dayne →
This entry was posted in Booktrope, creatures, creatures of the night, EDGE, horror, thriller and tagged Alex S. Johnson, Evil, Horror, Murder, The Animal, The Edge. Bookmark the permalink.

5 Responses to The Animal…Whores Among Us…